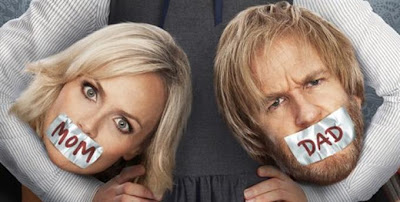 
This movie had disaster written all over it from the beginning.  When I first saw the trailer I thought it was a joke.  I couldn't imagine that someone actually thought that it would be a good idea to produce this film.  But then I got to thinking, as I sometimes do.  Maybe I was the one who was stupid for not seeing the genius behind this project.  I mean, it must have cost about five dollars to make; it's set in a house and at a local high school, the only star who's popularity would demand any money is Chenoweth, and the director did his own producing & editing.  And you know it's going to make some money; Chenoweth herself will drive in some viewers and sixteen-year-old girls always like watching movies about other sixteen-year-old girls.  So, while it's obviously going to be a bad movie, at least it should turn a profit.  I guess that's something, assuming that was the goal all along.  Because if the point was to make a high quality film, someone failed miserably.

Family Weekend is the story of Emily, a high schooler from Michigan.  Emily is a straight-laced, type-A, extremely rigid and organized young woman who has only one passion; jump rope.  She is a competitive high-speed jump rope champion who has little time for anything else, like a boyfriend or a social life.  She doesn't ask for much, but what she wants more then anything is to have her family care about her sport.  They no longer have the time to come to her events or to even acknowledge her existence, and Emily has decided that this needs to change.  Her plan is daring but, in her mind, necessary; to kidnap her own parents.  She thinks that if she can just force them to listen, to see what their family has become, to learn from their mistakes, that they can become real parents again, and perhaps that will make them all a family once more.

Emily's plan may seem unlikely to succeed, but it's made even more so by her extremely eccentric and abnormal family members.  Her mother, Samantha, is a stressed out workaholic who is never without her Blackberry.  Her father, Duncan, is a washed-up painter who spends most of his time behind his creative "membrane".  Lucy, her sister, was born to be an actress and is constantly in character, often obsessively and inappropriately.  Jackson, her brother, is a painfully unique homosexual who is loud & proud.  And finally, her brother Mickey, who is so obsessed with animals that he rarely interacts with humans.  Add in a hippie grandmother, a sweet but clueless admirer, and a couple of cops and Emily has a mess on her hands.  Can she right the ship before her next jump rope competition, or will her family go back to being unhappy & apart, despite her desperate methods? 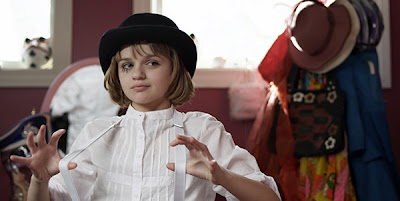 Some movies may seem like a walking nightmare but then you see them and they're not that bad.  This movie isn't one of those; it's just as awful as it looks and sounds.  There was an obvious and complete lack of effort put into making this film a success.  It looked like it cost five bucks to shoot, it seemed like it took five brain cells to write, and about five minutes in I was already checking out.  It just had no hope from the very beginning.  It's difficult to even figure out where they went wrong.  Maybe it was the jump rope, which I think was supposed to be original and funny but just turned out to be dumb.  Or maybe it was the barrage of stereotypical characters that we've seen a hundred times over in movies a hundred times better than this one.  There just isn't one aspect to point to and say "that was what wrecked it", but I don't think that's a good thing; you shouldn't produce a movie that has so many awful features that it's hard to single them out individually.

Maybe it was the acting that finally did this movie in.  There was a wide range of acting talent on display, but unfortunately the range went from bad to oh my god stop.  Kristin Chenoweth may have been the best as the uptight working mom; she had some natural flair and a few zingers.  Matthew Modine (are friend from the late 80s, Full Metal Jacket and Gross Anatomy), was pathetically average as a vegetarian wimp of a husband.  All the side actors were awful, with no more than shells of characters seemingly chosen at random.  But the worst of all, and perhaps the largest flaw of the film, was Emily herself, played by Olesya Rulin.  She's not exactly new, having done a lot of TV shows and TV movies including the High School Musical series, but she's pretty inexperienced when it comes to the silver screen, and it showed.  She was bad at best, totally unbelievable, had no chemistry with any other actor, and she wasn't very likable, which is a problem for a heroine.  So yes, after a second glance maybe I can point to the movie's biggest flaw, and she's smiling on the cover of the DVD.

Speaking of inexperience, director Benjamin Epps was working on his very first full length film, and man did it show.  I have the urge to take it easy on him, as he's just starting out and will probably have a few growing pains, but hey this is Hollywood and there is no room for excuses.  He did a hack job all around, from the flow of the movie to character development, from camera work to editing.  It was almost all horrid.  If I go digging deep enough I think I can find a few positives: I laughed a couple times, I was almost touched when there were family bonding moments.  But the goods were desperately outweighed by the bads, and I can't see that there were any redeeming qualities that could be used as reasons to see this film.  Family Weekend was a thumbs down in every department and you really, really shouldn't watch it.

Video - The video quality of the DVD is adequate, but not very impressive.  With the majority of the film shot in standard format and the rest done using a hand-held camera, there just isn't anything that catches the eye or makes viewers enjoy watching.  Same goes for the rest of the film, for that matter.

Audio - All audio options are in English: 5.1 Dolby Digital or 2.0 Dolby Digital.  There are no language selections or subtitles, but the disk is prepared for closed captioning.  The sound quality of the movie is fine, with no major hiccups, but don't expect greatness on your sound system.

Extras - There are a few interesting extras that come with the DVD.  A featurette called A Conversation with the Filmmakers is basically an extended trailer interspersed with short interviews of the director, writer, producer, and some of the actors.  Thor Smith-Dungy's "Chicken Dance" is an odd minute-long video clip.  There are two deleted scenes: Jackson & Kat Fireside and Rick Dances the "Camel".  And last, an amusing behind-the-scenes clip called Lucinda Gets Into Character.

Skip It.  Family Weekend is one of those movies that looks to be awful and gets worse when you watch it.  The plot is silly, the acting is terrible, and the direction is amateur.  There are no redeeming qualities to make this an enjoyable viewing and I recommend staying away.  The video, audio, and extras are fine but uninspiring, and the movie as a whole is a step below bad.  Sixteen-year-old jump ropers might be the only one's to get anything out of this film, and even that's a stretch.