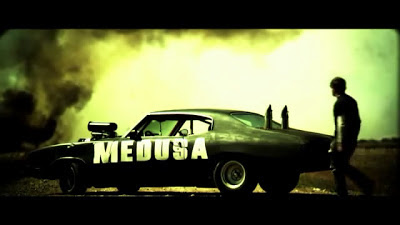 A) This movie was not about what I thought it would be about, and 2) you probably ought not to watch it.  But I'm getting ahead of myself.  Bellflower was written by, directed by, and starring Evan Glodell.  No, you've never seen his work before, he's new to the game.  And as far as an amateur filmmaker goes, he didn't do an awful job.  But I, for some reason, thought this film was about the apocalypse.  As it turns out, it's about two buddies who are slowing tricking out a car that will make them look really cool if the world happens to end.  Not the same thing.  But I quickly got over the fact that I had misunderstood the point of the film.  Sadly, I couldn't tell you right now what that point was, and that's only one of the many reasons that I would never recommend this movie to anyone.

The plot is pretty simple.  Two best friends, Woodrow and Aiden, move to California together in order to get away from small town life and to start an adventures like the one's they always see on television.  Turns out, real life isn't always fun.  They spend most of their time going to parties, getting hammered, starting fights, and hitting on girls.  In their spare time they work on their side project; the coolest car anyone has ever seen.  They form a two man gang called Mother Medusa, engineer a car that shoots out fire, and plan for the post-apocalyptic future in which they will be the coolest guys around.  But their innocence and their friendship are both challenged when Woodrow meets Milly, a crazy girl who tells him right up front that she will end up breaking his heart, which is, of course, exactly what happens.

I spent most of the movie trying to decide whether these were the best actors I'd ever seen or the worst.  Every conversation was stilted, awkward, and seemingly made up on the spot.  But then, people do say stupid things, especially when they're drunk or trying to impress a pretty girl.  So who knows, maybe what I was watching was realistic to the point of bothersome.  But the "acting" wasn't the problem.  Again, whether true to life or not, I couldn't really enjoy watching two guys get wasted, punch people, vomit, have sex, shoot a flame-thrower, crash on a couch, and the wake up to do it all again.  It got old fast, even if it was vividly raw in a way that you don't see very often.  The end of the movie actually helped me come to terms with some of the brutality and oddity of the film, but not quite enough.  It was very original, but it was just hard to enjoy and I wouldn't watch it again.  You probably shouldn't watch it a first time.