DVD Review - Oasis of the Zombies 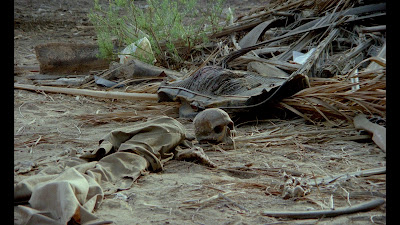 
If you're interested in 80s zombie movies, do yourself a favor and check out my review of Zombie Lake.  It's a staple of the genre, and is worth a watch if that's your thing.  Also, reading about/seeing that will set the table for this, my review of the very similar Oasis of the Zombies.  Also known as The Treasure of the Living Dead, it has a lot of connections to Jean Rollin's 1981 horror click, as both were written by Jesus Franco, the Spanish actor, director, writer, producer, you name it.  You can see one without seeing the other but, having seen them consecutively, I would watch them as a set.  Both are about zombies, Nazi's, naked ladies, neck-biting; basically everything you could ask for from classic horror.  It's up to you to decide which you like more, but both are bad enough to be good and neither will disappoint fans of b-movies. 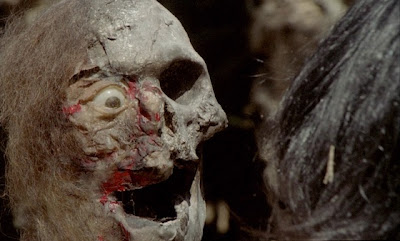 What sets the plot of Oasis of the Zombies aside from that of Zombie Lake is a reason to be near the undead-haunted locale that every logical instinct must be loudly warning the characters of the films away from, and that reason is treasure.  Legend has it that there is a lost cache of unimaginable riches somewhere deep in the African dessert, but that its location is both secret and dangerous.  Only one man knows its whereabouts, because he was there all those years ago.  He was part of a battle between Allies and a Nazi convoy during WWII, a bloody conflict that left everyone else dead and the wealth that was being transported lost forever.  When a German treasure hunter offers to team up with the lone survivor to find the hidden fortune, events are set into motion that will lead to the rise of the zombies who guard the oasis from anyone who dares enter their domain.

Meanwhile, a young man off at school hears terrible news; his father has died.  Knowing parts of the legend himself, he decides to travel to Africa and obtain the treasure before anyone else can.  Taking his friends along, the group begin their own quest to find the riches, beginning with a visit to a mysterious sheik.  The wise and rich sheik warns them not to go near the oasis, that is means death to all who enter it.  But they will not be deterred, and soon travel across the dessert.  A third party of interest has already begun their search, and one by one the teams find the secret location and encounter the danger that lurks there.  As the evil power of the undead rises, there is almost no hope of survival, for the dessert swallows all who come to the oasis of the zombies. 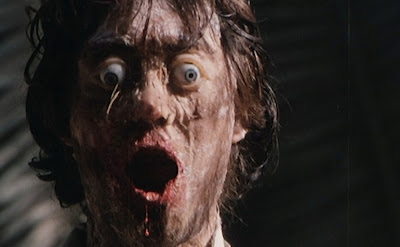 The similarities between the two films are striking, but not in a great way.  It's almost as if Zombie Lake were picked up, plunked down, and reshot a year later, this time in an oasis instead of a lagoon.  The same Nazi undead, the same slow marching, neck-chomping soldiers.  You had the hands rising out of the depths, the disfigured faces, the fire to keep them at bay, and not enough that was original to make up for it. The special effects were a little better, as seen by the still shots, and the gratuitous nudity was toned down a bit, but otherwise Oasis of the Zombies is the African version of same story.  You'd have to be a true die hard to enjoy the repetitive slow scenes of German undead rising from the sand and over the hills, marching toward screaming women.  And even then I think fans of the genre will still get bored after an hour and a half of it.

There was something missing from the plot that would have perhaps elevated it a small amount, and that was a convincing background story.  What made Zombie Lake a good movie was that it was silly and gory, but it also had a surprisingly touching history that made you actually root for the zombies a little.  Oasis of the Zombies had nothing like that.  I think they tried, creating a story about love in the dessert, an orphaned child, a secret past.  But it was all thrown away when the undead arose and it had no effect of the plot.  I needed something to root for, to help me get invested, and that never really solidified.  If it had, perhaps I could have forgiven the more b-movie parts of the film.  But as it was, I couldn't help focusing on the flaws and there were too many of those.

That's not to say there weren't a few positives that made the movie enjoyable.  As a fan of horror, I got a lot that I desire from the genre; blood, boobs, creepy music, strange characters, screams.  There were some laughable moments, which are always fun, and I did enjoy watching Jess Franco's work.  So, yes, for a zombie movie about undead Nazis it wasn't awful.  I guess what disappointed me was that it wasn't as good as others I've seen, as it relied a little too heavily on our forgiveness and didn't try hard enough to overcome the inherent flaws of it's genre.  If you're a fan, watch the pair of movies as a set and enjoy comparing the two.  For my money, Zombie Lake was more entertaining and of a higher caliber.  But, of course, watch and decide for yourself; neither are a complete waste of time. 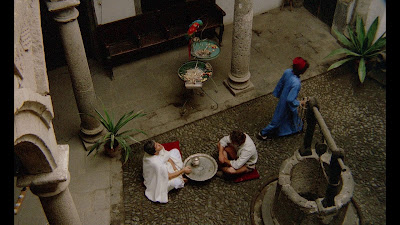 Video - With an aspect ratio of 1.66:1, the video quality is surprisingly good.  The remastered edition of the original film turned the archival negatives into HD quality video, and I have to say they did a great job.  Scenes were crisp for the most part, as long as you don't expect too much from a 1982 film transferred to DVD.

Audio - The film is in French, but there are English subtitles available to turn on or off.  Also, you can watch it with English dubbing, which I thoroughly enjoyed.  There's nothing like a dubbed b-movie about Nazi zombies to get your day going right.  As far as sound quality, it was done in Mono, so not great.

Extras - As far as extras go, there aren't many.  The only bonuses you get are four trailers: Oasis of the Zombies, Zombie Lake, Female Vampire, and Exorcism/Demoniac. 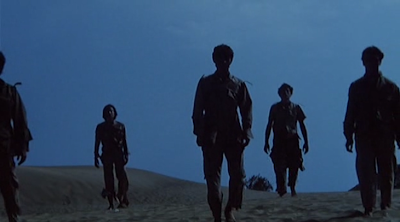 Rent It.  Oasis of the Zombies is worth the watch if you don't expect too much.  It wasn't great by any means, and won't be appreciated by the majority of audiences, but watched alongside Zombie Lake it isn't horrible.  It just didn't have enough to lift it out of the b-movie bog, and therefor couldn't really be enjoyed just by itself.  The video was nicely remastered, the audio was poor but with fun dubbing, and the extras were minimal.  All in all, not a movie I'd recommend to everyone, but worth a shot in the dark if you're a fan of the genre.