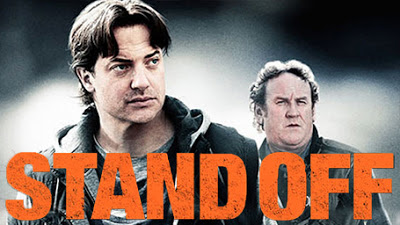 I'm a strong believer that there is a difference between a "film" and a "movie".  A film is artistic, it's a statement, it relies heavily on great acting and great directing.  A film has deeper meaning than what you see on screen, and it's tailor made to be discussed and picked apart.  A movie is entertaining, it's a fun time, it relies on mostly action, either comedic or intense.  A movie can be taken at face value, and the less you critique it the more enjoyable it is.  Now, some actors can switch back and forth between films and movies with little effort; Tom Hanks, for example, can move from funny to dramatic, heavy to lighthearted.  Others seem to be married to the film category; Daniel Day-Lewis comes to mind, as serious of an actor as you will ever see.  But on the other side of the coin there's Brendan Fraser.  He's attempted some serious acting, but his filmography is heavy with "movies": Encino Man, Airheads, George of the Jungle, Bedazzled, Monkeybone, and now Stand Off.  So the question isn't whether this picture is a film or a movie, but whether it's as entertaining as The Mummy or as awful as Dudley Do-Right. 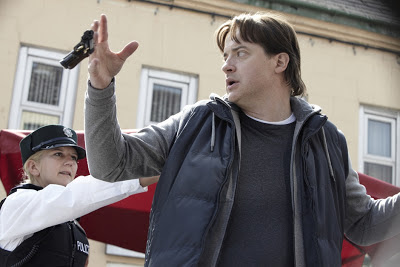 Set in Ireland, this crime caper comedy is a fast-paced story of a number of plans gone wrong.  The trouble starts with Jimbo, a luckless and penniless new father who is in way over his head.  He owes a ton of money to a man you really don't want to be indebted to, Mad Dog Flynn.  Mad Dog is a known criminal, and when Jimbo can't pay his debt the stakes are raised; Flynn now wants his son.  With the help of his friend, his friend's grandpa, and his friend's grandpa's car, Jimbo decides that he has no choice but to rob a fish market, pay off his debt, and save his family.  Little does he know that the burglary will not be a simple grab & dash, or that his problems are about to increase.  When he attempts to hide out in a local shop until the heat has passed, his troubles become enmeshed with Joe's, an American who's life is just as complicated as Jim's.

Joe Maguire is on the run from problems of his own.  He has left a crazy situation back in the States; a wife who wants to and nearly did kill him.  Taking refuge in Ireland at his cousin's shop, all he wants is to lay low, enjoy the country, and move on from a life that had been spinning out of control.  At first, things seem to be going swimmingly when he meets a beautiful woman named Sophie and they hit it off so well.  But when Irish Gypsies begin to bother him, when Mad Dog Flynn stops by his shop, and when Jimbo enters into his life, his vacation in Ireland quickly turns into anything but.  Add in a veteran detective, his rookie-cop son, an angry Irish mother, and a bunch of thugs with a bazooka, and you're in for a wild ride. 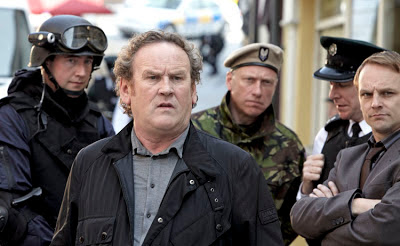 This movie is almost three for the price of one.  The first half an hour is a fast-paced Irish crime comedy with awesome characters, entertaining accents, and story lines that are too ridiculous to be made up.  If you liked Snatch you'll enjoy the first third of this movie; it's similar enough to be considered a ripoff, down to the Pikeys.  It's fun, silly, surprising, and quite enjoyable.  The second half an hour is one step down, but still pleasant in its own right.  It's more of a drama, where we start to get to the know the story, the driving force behind the plot, and more emotions are brought to the surface.  I actually started to connect with the characters and to care about what would happen to them when the dust settled.  But then the last third of the movie began, and everything went downhill.

The last half an hour of the movie was basically a bad action flick.  The comedy of the first third fizzled out, the pace faltered, and all the fun just disappeared.  The drama of the second part was left behind, the story was hurried through, and any emotions I was beginning to feel were ended.  And the blame for all this I sadly lay at Brendan Fraser's feet.  He dominated the end of the movie, and when he was called upon to step up his acting he was unable to do so.  And when he wasn't showing the world how not to act, the rest of the cast didn't do much to help.  They all fell flat, the momentum that had been build collapsed, and what we were left with was a shell of a movie that was too predictable to be acceptable.

Adding the three parts together we are left with a pretty confusing movie.  What started out as a cool crime caper turned into a mildly touching drama which then turned into a typical action flop.  So while I enjoyed the first hour of the film, I was left with a bad taste in my mouth, and it's Fraser-flavored.  I like the guy, but he's less an actor and more a person who sometimes appears in movies.  And speaking of, Stand Off turned out to be a fairly typical "movie".  It wasn't wonderful, but it was entertaining for the most part and taken at face value it had it's good points.  As long as you don't pick it apart too much it ended up being good but not great.  So I guess it falls somewhere in between The Mummy and Dudley Do-Right, wherever that strange place might be. 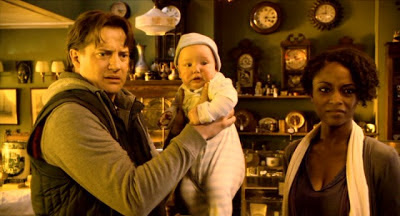 Video - Shot in standard HD widescreen, the video quality was what you would expect, and that was good.  However, for an action movie there was actually very little action, so there were very few opportunities to show off a high quality picture.  And late in the movie when the special effects were finally called upon they looked quite cheap.

Audio - Sound quality was high and well balanced.  There are two options on the DVD: English 5.1 Dolby Digital or English 2.0 Dolby Digital.  There are no language selection options and no subtitles available.

Extras - There is only one extra on the disc, and that is a trailer for the film itself.  Dull. 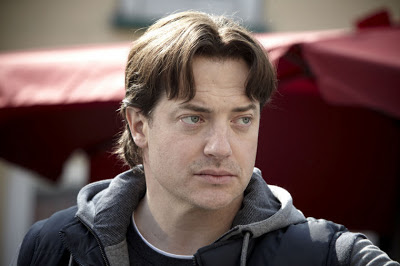 Rent it.  Stand Off was a fairly typical Brendan Fraser movie.  It had its moments and there were times when I enjoyed myself, but overall it was just as good as his acting ability, and that's not what you want.  The video was fine, the audio was good, and the extras were nonexistent.  And while I liked the beginning, the end brought me down, and I was left feeling a little disappointed.  So if you're willing to give a "movie" a partial pass, then you could do worse.