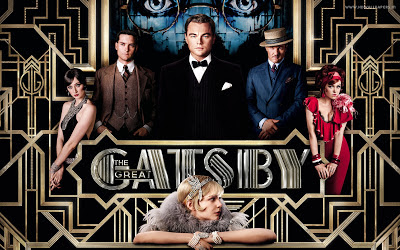 
I was very surprised when The Great Gatsby got such terrible reviews.  It had just been out for a couple days and already it was getting slammed by audiences and critics alike.  I just couldn't believe it; wasn't this the same film who's trailer had me and everyone I knew wanting to rush to the theatre that day?  What could be so awful that it would get such bad critique across the board?  I assumed it wasn't Baz Luhrmann's style, because people would be expecting that.  After all, if you've seen Romeo + Juliet, Moulin Rouge!, or Australia you know what to expect from his movies; larger than life characters & costumes, contemporary music, brilliant colors, basically a beautifully over the top interpretation of a simple story.  And it couldn't be Leo; everyone loves him and we generally acknowledge that he's a great actor.  No, there must be something about the film that the trailer doesn't hint at, and that must be the problem.  Well, I had to go see the film for myself, and when I did it was glaringly obvious, to me anyway, what that problem was.

Most of you will already know the classic story of Gatsby, but for those of you who may not have read the novel since high school, here's a quick refresher.  'The Great Gatsby' was written by F. Scott Fitzgerald is 1925, and is based on American life in the roaring 20s.  Set in New York City and Long Island, the story is told by Nick Carraway, a Yale graduate and WWI veteran who is trying to make it in the booming stock business.  When he moves next door to the illustrious Jay Gatsby, he enters into the world of the rich and begins to meet the young millionaires who now run society.  Nick's cousin Daisy, her husband Tom, and her golf-pro friend Jordan all join Nick and Gatsby in this crazy new life, setting into motion events that will change all their futures.  A secret is revealed; that Gatsby and Daisy were once star-crossed lovers who are still in love, despite time apart and her new family.  Nick is at the center of this whirlwind romance, he is every one's confidant, and he is powerless to stop the tragedies of life that seem to follow closely behind these beautiful, young, wealthy, passionate people who's every wish is attainable, but at a cost. 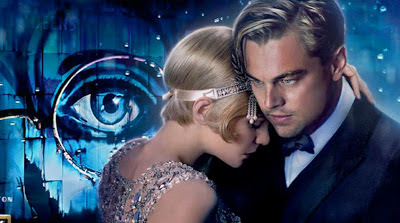 First, let's touch on the positives.  Luhrmann's script and directing were excellent.  The story held mostly to the book, the action was exciting, the costumes & sets were brilliant, and overall it was a visually stunning movie.  I know some people don't, but I like his style.  And since I was prepared for it I also liked the pop music and the over the top scenes.  I have recently reread the book, and although it is excellent, it leaves a lot to the imagination.  Fitzgerald talks about the parties, the cars, the women, the times, but he doesn't paint them clearly.  You have to do that yourself, and I think Luhrmann showed them to us very well, albeit through his own vision.  But it was nice to see a vibrant version of the book, because it must have been a vibrant time to live in.  If you've ever seen the 1974 version starring Robert Redford you've seen almost the exact opposite, and I'll take Luhrmann's version any day.

And the acting was terrific.  Leo was spot on as always.  He brought just the right amount of swagger as a young tycoon and just the right amount of uncertainty as a man in love.  He was the highlight of the film, and I believed him every step of the way.  He was surrounded by a pretty good cast as well.  I liked Carey Mulligan as Daisy; she was vulnerable, frightened, and malleable.  She had a hidden strength and intelligence that the book made clear she was keeping locked away on purpose, and that came across clearly.  And the big surprise of the film was Joel Edgerton as Tom, who I really don't know very well, but who did a fantastic job.  He was so insecure and overly abrasive, just like he reads in the novel.  So the cinematography, vision, and acting weren't the problems at all.  The worst part of the movie, by far, was Tobey Maguire.

He's just not a great actor.  He has been fine in many movies (Pleasantville, The Cider House Rules), but in them he was basically just being himself, not the character.  He is a young-looking, naive-seeming man, and when that is called for in a movie he does just fine.  As Nick, he was a fairly good casting, because he is supposed to be along for the ride, a narrator and a witness.  So I didn't have much problem with Maguire being there, but things went down hill when he talked.  And did he ever talk.  For no reason I can fathom his role was extremely prominent.  Not only was he basically the lead, but he also did voice overs and flashbacks.  They had him in a sanatorium telling his story to a doctor as a form of therapy and then writing it all down.  Fine, but you can't have Tobey Maguire as a lead in the movie, the narrator of the movie, and throw in extra scenes that aren't in the book just so you can give him more lines.  It failed horribly.  Leo should have been the lead hands down; after all he is Gatsby.  But Maguire was present way too much, and it ruined the flow, the believability, and the quality of the acting.  It brought the film down from an interested retelling of the book to a cheap Hollywood knockoff.

The Great Gatsby wasn't as bad as some critics are saying it was.  It also wasn't as good as I had imagined it would be.  It was a fine film version of a great book that, of course, won't be as good as the novel.  It could have been so much better than it was if only they had toned down the Maguire.  Not that he's awful, but he can't support that much heavy lifting, and his weakness showed to the point that it hurt the film irreparably.  I just wish they had done away with the unnecessary flashbacks, or the overdone voice overs, or the words of the novel flashing across the screen.  It was too much, and with Luhrmann's style already a lot to handle, we couldn't take so many vibrant pieces all at once.  It hurts me to say that I'm hoping someone will make another version of the novel, one that is more exciting than the old one and more controlled than the new one.  That would be a movie to see.