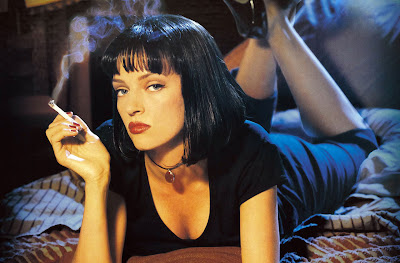 
What more can I say about Quentin Tarantino?  Whether you like him or not, you've got to admit that he's an original.  His movies are cool in a way that other directors can only dream about.  Yes, they're violent and vulgar, but the ideas and the plots and the twists and the characters; you just wonder where inside his brain these ideas came from.  And, of course, some of his films are better than others, but they are all at the very least more interesting than anything else you are going to see on any given day.  Reservoir Dogs, being his first full length film, is unpolished but still excellent.  Jackie Brown is a great combination of Taratino's talent and Elmore Leonard's intrigue.  Django Unchained is, for my money, his very best so far.  And Pulp Fiction falls somewhere in the middle of that pack; an excellent film full of new ideas, quotable lines, and enough blood to get you squeamish but keep to watching.

Multiple plots twist around each other in this crazy story and keep you spinning from beginning to end, and the man at the hub is Marsellus Wallace, gangster extraordinaire.  His two lead thugs are Vincent and Jules, friends who discuss the deeper meanings of life while killing lowlifes.  When Marsellus leaves town, he asks Vincent to take his eccentric wife Mia out for a night on the town.  Of course things don't go as planned, as drugs, sex, and twisting all get in the way.  Meanwhile, boxer Butch and his girlfriend are making a daring attempt to get out of the crime game and away from Marsellus.  This side story revolves around an ancient watch, a pair of bloodthirsty hillbillies, and a chopper.  All these wild plots become connected, out of order, and perversely entertaining as Pulp Fiction draws to a dramatic close.

That was actually more difficult to summarize than I thought it would be.  The way the stories are broken up and rearranged makes it hard to see them straight, but it also makes the movie that much more fun to watch.  And that's what it's all about; this film is enjoyable to watch.  It's also very unique, which is why it's loved by  audiences and critics alike and is often held as one of the best movies ever.  Now, I wouldn't go that far.  I liked Django Unchained much more, and I even liked Jackie Brown slightly better.  But Pulp Fiction had its great moments, chiefly the scenes with Travolta and Jackson.  They were excellent and I would say they made the movie.  I didn't really care for Uma Thurman and her storyline was the only one to really drag, but other than that the story was fast and exciting.  Willis did a great job as well, and so did Roth, Harvey Keitel, and Ving Raymes in smaller roles.  Overall, the movie was great; entertaining, funny, bloody, and a one-of-a-kind piece of work that doesn't come along nearly often enough.