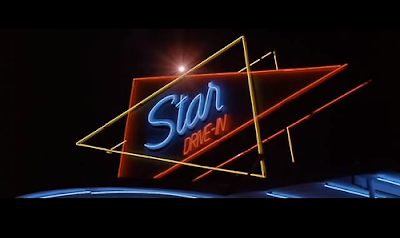 
Sometimes you watch a movie and you're not sure what just hit you.  Often that's a good thing; an unexpectedly awesome film blindsides you, like Gun Hill Road.  Other times it's not so great; you come away wondering where your two hours just went, like Public Enemies.  Either way, I guess surprise can be fun, be the final product good or bad.  And as far as movies go, I don't mind going into it blindly and coming out of it feeling strongly one way or the other.  But then, every once in a while, a film is neither excellent nor horrible.  You watch it not having any idea what might happen and when it's over you don't have any clue what did happen.  Dead End Drive-In is one of those movies; seeing it doesn't help you understand it, you're just along for a very odd ride.

The story is set in a dystopian future where crime is the norm.  After multiple disasters and a world economic collapse, most of the population is unemployed and deviant.  Major cities have turned into giant slums in which the police have very little control.  A large amount of the existing economy is centered around cars; people trying to steal each others' cars, people trying to claim abandoned cars, people fighting one another over their cars.  And so, when Crabs gets to borrow his brother's cherry Chevy and takes his girl Carmen out on a date, he is extra protective of his ride.  When the wheels are stolen right out from under them, the naive couple find themselves trapped at the Star Drive-In, where no one ever escapes.  As they begin to understand the world into which they have just entered, Crabs becomes obsessed with escape, while his girlfriend is slowly accepting her new home, which many "residents" find preferable to their old existence.  Will it be a dead end, or does hope remain?

Basically, we have a movie that's 80s fabulous, where everyone speaks in an Australian accent, set in a drive-in that no one can escape from, and where everyone once had a beautiful car.  It's like Grease meets Mad Max.  And if you've ever seen Nothing But Trouble (which few people have but I highly recommend out of pure insanity), it's also like that, but not funny.  So, it's hard to explain; was it good?  No.  Was it bad?  No.  It was strange, and I don't really know how anyone thought of it.  Taken at face value it was a bloody, high octane, off-the-wall Sci-Fi thriller.  But I think what may elevate it above this level is that it actually had an interesting undertone and possible deeper meaning.  There were allusions to concentration camps, ghettos, racial tension, government conspiracy, prison overpopulation, economic importance, and authoritative obedience.  So, if you're looking for a cult classic oddity you've found your film.  And if you're looking for a little depth, you may have found that as well.  I just don't know.  You'll have to watch it to find out, and see if you come away with any clearer of a picture.