Movie Review - The Cabin in the Woods 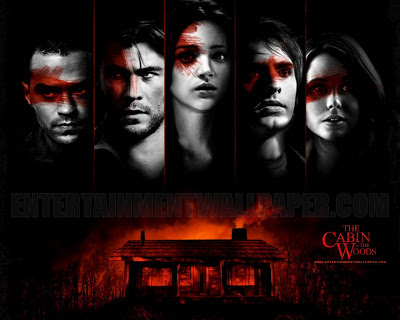 I like to think that I have good taste.  Although, doesn't everyone?  It's like that line from When Harry Met Sally, "Everybody thinks they have good taste and a sense of humor but they couldn't possibly all have good taste".  I accept that, but I go on thinking it anyway.  After all, I'm me and I might as well agree with myself.  So anyway, I think I have good taste, especially when it comes to movies.  I also think I'm always right, especially when it comes to movies, but that's a separate issue.  But I have one very weak point when it comes to my supposed fine palette, and that's horror films.  I'm a sucker for horror.  I like the slashers, the campgrounds, the teenagers, the urban legends, the fake blood, all of that.  I like zombies, psycho killers, creatures from other dimensions, government experiments gone wrong, you name it.  Now, I think I can tell the difference between good and bad horror, but I tend to give it a little bit of slack because I love the genre so much.  So when I went to watch The Cabin in the Woods I expected your standard horror flick and I expected to like it.  I was unprepared for just how awesome it was going to be, how it would be everything I wanted, and yet how it would be nothing like any horror movie I had ever seen.

The story could not be more classic; five college kids decide to go on a road trip to spend the weekend at a cousin's cabin.  The house is deep in the woods; no cell phones, no towns, only one very creepy gas station near by.  And if the story has been done before, the characters have been carved in stone; the whore (a beautiful blonde with a penchant for provocative dancing), the athlete (a muscle-bound, beer drinking boyfriend), the scholar (a sensitive yet attractive friend of a friend), the fool (a pot-smoking goofball), and the virgin (a sweet innocent who has depth).  Add it all together and you've got slasher gold; spooky location, rickety cabin, hidden secrets, sculpted bodies, tons of blood.  But all is not as it seems, as this cabin in the woods is not simply a horror paradise.  It is much more, the story is much more, and the characters are in for much more than a simple death.

I could not be happier, because this movie had everything I was looking for.  It had all of the classic components of the films that I love; blood, boobs, lakes, cellars, knives, screams, terror.  And it was an excellent homage to the ones that have come before, particularly The Evil Dead.  But while it was almost an exact copy of others in this genre, it had a secret that set it totally apart.  The twist is given away in pieces early and often, and it becomes part of the plot, so that old school horror and new-age technology are combined seamlessly to create something truly original.  I'm not sure if I've ever enjoyed a horror movie as much, and it's mostly due to the fact that somehow the director created a perfectly typical slasher film who's attempt to be different wasn't silly or cliche.  It was refreshingly unique, awesomely bad, surprisingly deep, and an overall great film, horror or no.  If you're a fan of the genre you have got to see The Cabin in the Woods.