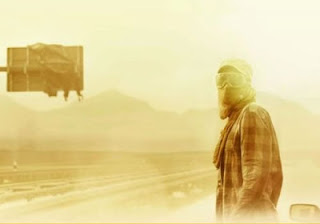 
I love stumbling across a great movie that I didn't even know existed until it happened to catch my eye on IMDb.  Hell is definitely one of those films; it was just pure luck that led me to it.  It's a German film, but it was produced by native German Roland Emmerich, who directed Stargate, Independence Day, Godzilla, The Patriot, The Day After Tomorrow, 10,000 B.C., 2012, and White House Down.  And I know that's a list of fairly horrible movies, but keep in mind that Emmerich didn't direct this one, he just got it up and running.  The only thing Hell has is common with those movies is that it's post-apocalyptic, so the disaster theme is present.  But it's not an American summer blockbuster by any means; it's a brutally simple survival story that somehow flew under the radar.

Set in the near future, the planet is nearly unrecognizable from the one we live on today.  The world has changed; the sun is more active, the atmosphere is hotter, and life on Earth is struggling to survive.  The crops and animals have all died, and only a few humans remain scattered across the globe, scratching out whatever existence the can manage.  A trio travels the countryside attempting to find water; Phillip, Marie, and Leonie.  They believe that life is flourishing high in the mountains above the tree line, but to get there they must cross a barren landscape where the searing sun threatens them every step of the way.  When they meet Tom and combine their meager supplies with his, things seem to be looking up.  But as they travel they realize that they're not the only group fighting for life, and that humanity has become savagely desperate in the attempt.

I really liked this movie; it was just so surprising.  I had never heard of it, didn't expect it, and was so glad I had watched it when I was finished.  That doesn't happen often enough.  It was an extremely simple story; survival at its most basic.  There was no wasted dialogue, no silly action; it was bare bones, raw, and real.  I love post-apocalyptic movies anyway, and the idea wasn't extremely original, but it was just done so cleanly that I didn't mind if I'd seen similar stories.  The Road comes to mind, and that was darkly realistic too, but it was an allusion of so many things, while Hell was more directly a tale of human perseverance.  As far as the acting goes, it's always hard to tell with foreign films because you're reading subtitles, but I bought into the characters and was on the edge of my seat the whole way through.  There was a terrifying awareness that at any moment some or all of the characters could die, like a brooding creepy feeling that I just couldn't shake.  It was a disturbingly realistic movie that was both entertaining and thought-provoking, and you don't see that every day.