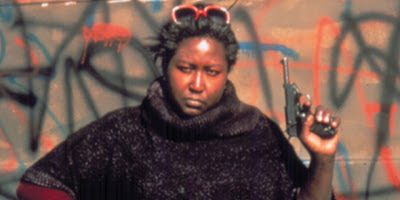 
I enjoy cult classics.  I like b-movies.  And I've seen my fair share of awful films that have a certain something that makes them enjoyable.  Sometimes it's that they're so bad they're hilarious.  Or sometimes it's that you can't imagine where someone got such a wacky idea.  But a good b-movie or cult classic has to have an x-factor that rises it above the normal crap and makes it indescribably cool.  I was hoping that would be the case with Surf Nazis Must Die.  I thought it would be comically poor.  But no, it wasn't.  It wasn't witty, original, or fun in any way at all.  The only thing it was was bad, and not awesomely so.

So here's the plot; California has been rocked my a massive earthquake.  Order has gone out the window as police can only respond to the most devastating events.  Crime has risen beyond control and the gangs that once only bothered people on the beach are now claiming the coasts as their own, killing, stealing, and doing whatever they please.  The leader of the Surf Nazi gang, Adolf, along with his Hitler Youth, begin a campaign to unite the gangs and take total control of the beach.  But when an innocent man is murdered and his mother finds out, hell is unleashed on the Nazis in the form of an angry black woman with grenades.

It was bad.  OMG bad.  There was nothing funny or interesting about any part of the film.  It wasn't awesomely bad, it wasn't comically bad, it was just bad.  I was bored and sorry I was watching it about ten minutes in.  The only redeeming quality was Mama Washington, but you can only watch so much of her running around killing "honkies".  I'm just not sure why someone took the time and money to make this movie.  Were they bored?  Did they have a lot of surf boards that they wanted to spray paint swastikas on?  Surf Nazis Must Die may be the worst movie I've ever seen in my life, and not in a good way.