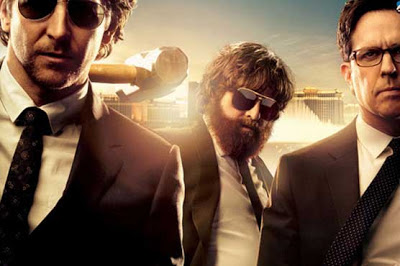 
The average user rating of The Hangover on IMDB is 7.8 out of 10, while critics give it a 7.3.  Not bad, and having seen it myself I'd say that's pretty accurate.  It was cool, hilarious, offensive, and fun to watch.  The characters were original, the cameos were nicely done, and I had a good time.  Then came The Hangover Part II with respective ratings of 6.5 and 4.4.  Ouch.  But again, that's about right.  It was a complete copy of the first movie, just in a new location.  It was more crude, if possible, and much less funny.  It was a whole lot less interesting, less entertaining, and crappier in general.  So next up was The Hangover Part III, and while I felt that I had to watch it, I wasn't expecting much.  And good thing too, because its early ratings were 6.3 and 3.0, a pretty bad sign.  But I went to check it out anyway and got to see for myself that it was indeed just as awful as you might imagine it would be.

First, you've got to get to know the Wolfpack.  These four friends have been on some wild adventures together: Phil (the cool one), Stu (the uptight dentist), Alan (the weirdo), and Doug (the throw away character).  In the first movie, the group loses Doug after an insane bachelor party.  They've got to figure out what happened when they were wasted and find him before his wedding.  In the second, almost the exact same thing happens before Stu's wedding, this time in Thailand.  And in the third, the gang are on a road trip when Doug is again kidnapped, this time by a thug named Marshall.  Phil, Stu, and Alan must find their old friend Mr. Chow if they ever want to see Doug again.  Apparently Chow is a man on the run, with twisted plans on how he will return to glory.  The Wolfpack are in over their heads, as they must deal with gold bars, Mexican cops, escort services, pawn shops, and ultimately the town that started it all; Vegas. 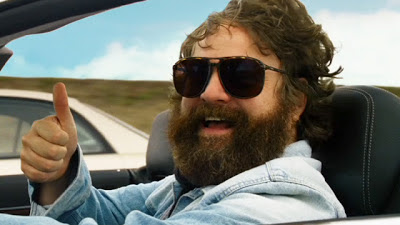 I knew going in that I wasn't seeing a fine piece of film.  I expected it to be bad, but I also expected to laugh.  And I did, about two or three times.  It just wasn't funny.  There weren't enough "oh shit!" moments, enough vulgarity, or enough wit.  Falling flat may be an understatement; falling dead may be more like it.  I wanted the plot to be similar to the first two; a hangover, confusion, hilarity, penis jokes, generally foolery.  But instead it was almost an homage to the other two.  Umm, this isn't the last episode of Cheers, you can't just bring back all the old characters, reference the past, and expect us all to cry while saying farewell.  It's a dumb comedy series that was mediocre at best; two funny films does not a dynasty make.  So I was left wanting much more; basically the first film over again, or at least a movie that stuck to a format that was proven to work.

There were some high points.  Zack Galifianakis was featured much more, which I liked, and Bradley Cooper was featured much less, which I also liked.  However, Ken Jeong was the central point of the plot, and I really don't think he's that funny.  So maybe that was the problem; the humor was centered around a character and an actor that I don't find very humorous.  John Goodman was unnecessary, Heather Graham was as untalented as ever, and even Melissa McCarthy made an appearance, which was actually kinda good.  All in all, I wanted the bachelor party madness that I had once enjoyed.  What I got instead was a reunion show of an average franchise.  And what's even more sad is that at the end of the film, during the credits, there was a patented Hangover scene that made me laugh more than the whole movie combined.  Probably shouldn't have saved that until the end, boys; you already lost me. 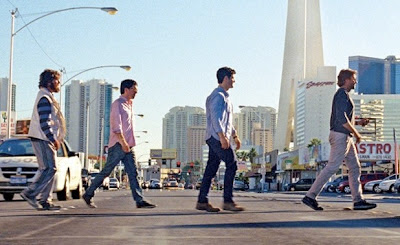