Movie Review - Quigley Down Under 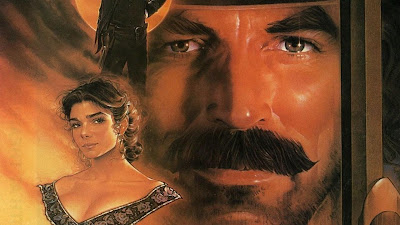 
Add this one to the long list of movies I watched as a kid and completely forgot about.  Quigley Down Under was a Friday family film that we all really enjoyed and that became a part our own inside jargon, but it was so many years ago that the memory of it has been almost entirely lost.  I used to really love westerns too, especially the John Wayne classics, but I've gotten away from that I guess.  Well, here's to going back out west.  Or, in this case, down south, as the entirety of this movie takes place in Australia.  And with Tom Selleck as the star, the ultimate American hero with the mustache to end all mustaches, what could go wrong?

Matthew Quigley is your quintessential cowboy; rugged good looks, ten-gallon hat, flashing spurs, long rifle, red bandana, and a mysterious past that just makes him that much more wonderful.  Answering an advertisement for a sharpshooter, he travels across the Pacific to Australia only to find that all is not as it seems.  First, a barnacle of a madwoman attaches herself to Quigley, all the time calling him Roy.  And secondly, his new boss may not have the best intentions with his new eagle-eyed employee.  As Quigley begins to get the lay of the land, he must make some hard choices; saving his own hide, protecting the woman that won't leave his side, doing the job he was paid for, or becoming the hero of the beautiful place that he has learned to love.

Oh, Quigley.  As I watched the movie a lot of it came flooding back, including my own childlike enjoyment of what turned out to be a fairly silly story.  At the beginning I was sure I wouldn't like it.  Tom Selleck is barely believable as a real person, let alone a heroic cowboy.  San Giacomo has this very distracting Texan accent and an even more off-putting character.  The music was cheesy, the dialogue was poor, and the movie was tanking.  And then along came Alan Rickman to save the day.  The villain of the movie turned out to be the savior of the film, as his performance was the only great thing about the entire picture.  By the end, I did start enjoying myself by letting the western ridiculousness wash over me, and I ended up having a good time.  If that's all that can be said about the worth of Quigley Down Under, that's at least somthing.