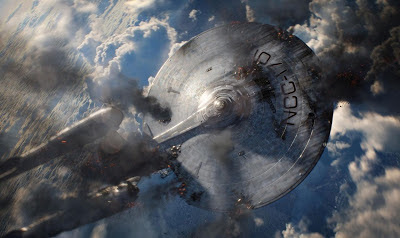 
When Star Trek first came out in 2009 I didn't think I would like it.  As a fan of the original films, I was a little put off by a the young cast of Hollywood newcomers attempting to represent the characters I had come to love.  I mean, come on, Harold as Sulu?  I wasn't buying it and I wasn't planning on watching it.  But I ended up seeing it, and sometimes it's nice when you're completely wrong.  It was much more of an homage than a ripoff, a origin story rather than a remake, and it actually came across as more than an attempt to make money.  I mean, it made money, but you could tell by watching it that these actors and Abrams all liked Star Trek, that they wanted to do the characters and story justice, that to them it wasn't a throw away project that would be a definite blockbuster no matter how little effort they put it.  I came away really enjoying the movie, and so when the second one came out I had no reason to doubt that I would like it as well.  And again I was shown that you can do justice to a beloved film series without damaging it.

Star Trek Into Darkness picks up where the first film left off, with Captain Kirk commanding the Enterprise, Spock as his right-hand man, and the rest of the crew filled out by familiar names: Sulu, Chekov, Bones, Scotty, Uhura.  The team is in deep space, visiting and observing distant planets.  On one occasion, when things don't go as planned and Kirk improvises, his actions endanger the fragile relationship he has with Spock and his burgeoning career.  Back on Earth, Jim is reprimanded, stripped of his command, and demoted.  He blames Spock for these new troubles, and yet knows that he can't change, that he can't begin to follow all the rules like his Vulcan friend, that what makes him a great Captain is his gut, his passion, and his love for his crew.  But Kirk's problems are just starting.  An apparent terrorist act sets him on a new mission, a simple manhunt far into enemy territory that cannot be as easy as it seems.  As the truth begins to unravel, the crew of the Enterprise is drawn into a tangled plot, and Kirk must work alongside a man who will someday become his most hated enemy. 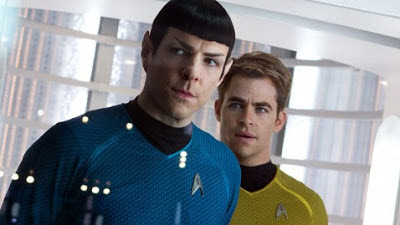 What a ride.  From the very beginning, the film is non-stop action.  Kirk is in mortal danger for almost the entirety of the film; running from angry natives, leaping into oceans, dodging lasers, shooting through outer space, getting into fistfights, falling from heights.  Spock would say there are no such things as miracles, but I don't see how Jim survived.  You've got to have a pretty strong ability to suspend disbelief, but if you can get past the simple fact that the main character ought to be dead, it's an enjoyable experience.  The effects and ideas that were put into the movie are pretty incredible, and I was never bored.  Just the opposite; I was on the edge of my seat for the majority of the film.  And that's funny if you really think about it, because I know all the characters survive and go on to have countless adventures; I've seen the original films.  But putting that aside, I did find myself rooting for the crew, worrying that they wouldn't make it in time, and having a generally fun time watching a cool movie.

As far as the acting went, that was pretty good too.  I like Chris Pine as Kirk; he brings the right amount of swagger and compassion.  And Spock is a great counterpart.  His logic and emotionless actions put Kirk's bravery and recklessness into perspective, and Quinto plays the character well.  The nice surprise of the film was Benedict Cumberbatch as Harrison, the murdering renegade.  He played a deep part with a lot of anger and intrigue.  The side characters were just alright, my favorite being Yelchin as Chekov, my least favorite being Alice Eve as Carol; she was completely unnecessary and fairly awful.  But I guess the acting isn't exactly what people are going to the theatre to see.  They want action, adventure, Star Trek homages, and quick quips.  Well, they got all of that and more.  Star Trek Into Darkness turned out to be just as good as the first; an entertaining film that was a step up from most silly action movies.  Give credit to Abrams for not making a cheap ripoff, and give credit to the actors for showing us that they genuinely respect the franchise. 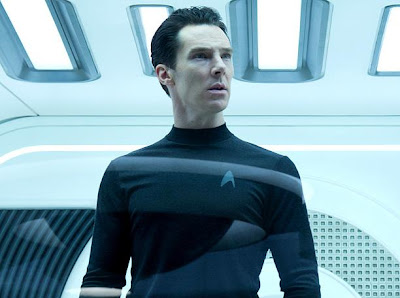