Movie Review - Humanoids from the Deep 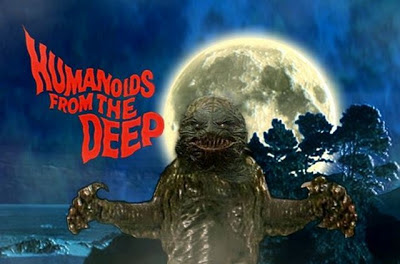 
Sometimes I might get a little bit carried away.  Right now I'm back on a horror/slasher/creature feature kick and I'm having trouble getting off it.  But you know, sometimes things work themselves out.  For example, Humanoids from the Deep might have been the exact movie I needed to get me back into the world of fine cinema.  I have nothing against b-movies, actually I love them, but sometimes they can go too far, and this one certainly does.  Not that I didn't enjoy it on some level; it was pretty perfect for a movie in the background while I was doing something else, but I can't see it being useful for anything else.  Bad movies can be great and bad movies can be so bad that you want to injure your own eyes and ears; unfortunately this one was the latter.

The story takes place in a tiny fishing village that has seen better days.  The fish aren't plentiful anymore, no one has any money, and life's not great.  When a new company wants to build a plant there, the townspeople are split; some welcome the job growth while others want to protect the land from harmful effects.  What none of them know is that changes have already started.  In an attempt to increase salmon growth, scientists have unknowingly altered the evolution of the area, causing a brand new species to develop; a half man/half fish breed of creatures that will threaten the whole village.  Can the townspeople defeat this new mutation, or will the monsters rise to the top of the food chain?

The description of the story really says it all; that's the actual plot.  Now, a lot of creature features have similar science experiment gone wrong story lines, but for some reason this one comes across as even more silly then usual.  The monsters themselves look like Black Lagoon rip offs, and the special effects are bad at best.  I won't talk too much about the acting, because of course that's bad, but you think the actors could have at least tried.  Add in the naked girls running around the beach while the monsters chase them, the wise Native American fisherman, the town festival, and you've got a recipe for an awful movie.  Yes, it's a b-movie and so there are parts that are enjoyably horrible, but overall it's less funny and more pathetic.