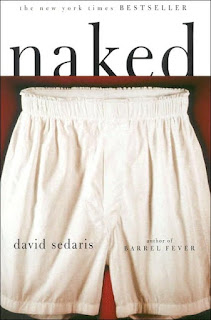 
Apparently I'm way behind getting on board the David Sedaris train.  I had never read any of his books, nor had I even heard of him, until he was a guest on The Daily Show.  He was promoting his newest book and he was immediately interesting, weird, and really funny.  So I figured his books ought to be too.  I found one of his most popular books, Naked, got it from the library, and read away.  By the time I was about fifty pages from the end I had completely checked out.  There is only so much pointless writing I can take before I give up hoping that some of the humor and intrigue I saw on the show will start to appear in his writing as well.

The book is a satirical memoir of the early life of David Sedaris.  It chronicles his youth as the child of a Greek father and a hard-nosed Mother.  It tells of his crazy grandmother, his wild siblings, and the dysfunctional home they made.  At an early age, David was obsessive-compulsive, with ticks & habits that kept him in an isolated bubble.  As he grew up and these additions were replaced by others, he was able to meld into society, but never felt like he quite fit.  Taking to the road, he became a wanderer in the Kerouac style, experiencing all the people and places that the country had to offer, and finding himself in the process.

Naked was barely a book; it was more a rambling.  It wasn't exactly an autobiography, because you were never sure how many of the details were true and how many were complete fiction. And it just went on and on and on, accomplishing nothing other than stroking the ego of the author.  There was no point, which I could deal with, but there was also no comedy or wit, which was harder to accept.  I just don't understand; how can I be expected to enjoy a book about someone's uninteresting life?  So your family is Greek; great.  You traveled around and met some weird people; OK.  Got anything else?  I just don't understand how this book is so popular, unless his others are much better, and I'm not sure I have the energy to find that out.