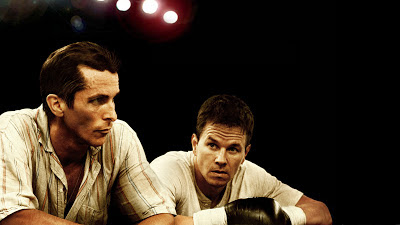 I made it a point to see The Fighter when it came to theatres, as did a lot of people apparently.  It definitely had Oscar written all over it, and not in an artsy, foreign way either.  It looked like a movie that both audiences and critics could enjoy.  And enjoy it they did, especially the Academy, as it was nominated for numerous awards: Best Supporting Actor, Best Supporting Actress twice over, Best Director, and of course Best Picture.  Melissa Leo would go on to win Best Supporting, as would Christian Bale, and both were very deserving, especially since an argument could be made that Bale was basically the lead character and could have easily won Best Actor.  Anyway, the movie was a hit, I thought it was great, and watching it over again didn't take anything away from that.

The fighter mentioned in the title is Micky Ward, played by Marky Mark.  Micky is a light boxer, and has never been more than a stepping stone for those more talented.  His brother, however, was once an accomplished fighter and the pride of Lowell, Mass., but now Dicky is no more than a washed-up crack-head who dreams of staging a comeback.  Micky & Dicky are part of a wild family, full of loud sisters and over-bearing parents.  When Micky meets Charlene, he dreams of finally getting free of his family and making it as a serious contender.  But with Dicky's addiction hanging over their heads, the brothers stumble time and again, never fulfilling either of their fantasies of stardom.  When Micky finally gets his shot, he must decide between his brother and his career; a choice that will rip the family apart.

I don't think the summary does the movie justice, because this is a true story, not some Hollywood sob story.  Micky & Dicky were both actual boxers, and the latter's drug addiction was well documented.  The plot feels real from the very beginning, from the crazy family to the town of Lowell.  And you'll not get much better acting than in this film.  Both Amy Adams and Melissa Leo are excellent, both deserving of their Best Supporting nominations.  Mark Wahlberg was steady if not incredible; he wasn't really called upon to make the movie.  That job was Christian Bale's, and wow did he ever.  His performance is amazing, as he became the character of Dicky absolutely.  He played the part with depth, emotion, humor, reality, and skill.  Apart from Daniel Day-Lewis, I don't think there's a better actor out there right now.  Bale just has "it", and he put it on display in The Fighter.  Do yourself a favor and see this movie; you'll be impressed.