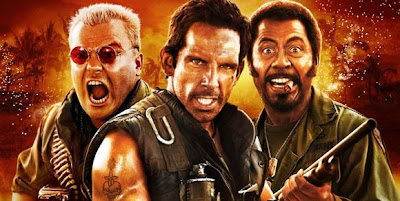 I first saw Tropic Thunder shortly after it came out on DVD.  I was surprised, to say the least.  It was funnier than I had expected.  Yes, it was goofy, insulting, and ridiculous.  But it was also rather satirical; poking fun at the movie industry, actors, and even audiences.  It was one of the more amusing movies I'd seen in a while, and I went ahead and bought it.  Well, I never actually watched my copy, so I was unsure how it might feel the second time around and five years later.  Turns out it was still silly, still tongue in cheek, but maybe not quite as hilarious as I had once thought.

The plot is a movie within a movie kind of thing.  Some of the biggest names in this fictional film industry have come together to create an epic Vietnam war masterpiece that tells a true tale of courage and survival.  The actors include Portnoy (a comedian famous for farting), Speedman (an aging action star), and Lazarus (a perennial Oscar winner).  When the movie falters and personalities clash, the director decides to put his actors in a real life situation in order to get them into gear.  However, real life soon turns deadly, and the actors find themselves fighting for their lives.  Can these larger-than-life personalities work together, or will the mission fail?

The movie is a lot to take.  There are a ton of pieces that can overwhelm you instead of crack you up.  All the big name actors pretending to be actors who think they're in a movie about a true story, but it turns out they're in real life no longer making a movie about a story that isn't actually true.  Yeah.  It's muddled to say the least, but thankfully the plot isn't really the point.  It's more about the message, about how ridiculous Hollywood is, about how strange actors can be, about how we as audiences pigeon hole actors into genres and never let them escape.  So this movie has a lot to say, but sometimes it gets lost in the wash.  But regardless, it's a comedy first, and it delivers in that way.  It's constantly funny; sometimes witty, sometimes shocking, sometimes stupid.  So no matter what type of comedy you like you ought to be able to find a way to laugh.  My favorite were the odd cameos; Nick Nolte, Matthew McConaughey, Tom Cruise.  It was obvious that these guys were having a great time making an over-the-top film that pokes fun at pretty much everything.  Don't take this movie too seriously and it'll be enjoyable.  It may not be as awesome as I first thought, but it's still worth your time and worth a few laughs.