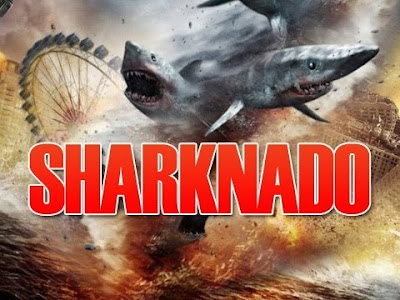 If you haven't heard of Sharknado you've been in a cave for the last couple of weeks.  What started as a made-for-TV movie became a Twitter sensation, prompted an encore presentation, and has supposedly produced a future sequel.  It's baffling really; the SciFi channel has created hundreds of unwatchable horror movies, why did this one explode into pop culture?  Well I had to watch it to find out, and now you're being graced with its review.  Obviously I didn't expect too much going it, but after seeing it I'm even more confused than I was before.  I guess all the other SciFi originals were bad, making them throwaways.  This one was so bad that it was a sensation.  Go figure.

The storm of the century is coming, and California better brace for impact.  A hurricane is sliding up the coast of Mexico, picking up hundreds of sharks and carrying them north where they have never been before.  When the storm slams the coasts of the Golden State, flood waters rise, water spouts emerge, and sharks are everywhere.  Fin, a bar-owner, and his crew risk the now dangerous California freeways in order to rescue his ex-wife and children, a task made difficult by bloodthirsty sharks in the drains, the pools, and in the air.  They can stick together, they can arm themselves, but can they survive the sharknado!?

This is maybe the worst movie I've ever seen.  At least I understand now why everyone wanted to watch it, because films this horrendous don't come along every day.  I mean, you really have to try to make something this awful.  Each scene seemed hand-crafted to be more terrible and to make less sense than the one before.  And then Tara Reid, that guy from 90210, or Kevin McCallister's dad would pop up and spout the most ridiculous line and things would get that much worse.  I spent most of the movie shaking my head and feeling slightly embarrassed; for the people who actually spent money to produce this film and for myself for sitting down to watch it.  Be prepared for a ton on shark bites, some cheap special effects, a lot of actors looking around stupidly, and many shouts of "watch out!" when someone is dangling above a shark's mouth incapable of looking or moving anywhere else.  That's kinda how I felt while watching it, and I don't think I escaped unscathed.