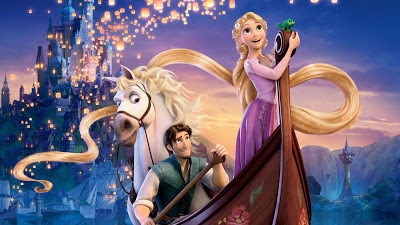 
I'm a big fan of the Disney musicals, as are a lot of people my age.  We grew up watching The Little Mermaid, The Jungle Book, Aladdin.  They were a part of our childhood and we still sing the songs.  When Tangled came out I was told that it was a great throwback to the glory days of Disney, that it brought the music, the epic story, and the magic that captured our hearts when we were young.  Well, I'm not gonna go so far as to say that it's the second coming of Beauty and the Beast, but it did remind me of the good old days.

The story is pretty cool.  The king and queen of a wonderful land are about to have a baby.  The queen is sick, so the whole kingdom attempts to find a cure.  They come across a golden flower, touched by the sun, that can both heal and give long life.  Unfortunately, an evil witch named Mother Gothel wants the flower as her own, and so when a beautiful blonde girl is born Gothel kidnaps her.  The girl grows up to be Rapunzel, the long-haired legend that has never left her tower home.  That is, until an outlaw named Flynn shows up and the pair join together on a quest that will reveal Rapunzel's past and change both their fates forever.


I might have been skeptical when I first heard about it, but it's actually really good.  The classic story is retold nicely, with the addition of a thief instead of a prince.  The music is pretty excellent and very catchy.  I didn't love Mandy Moore as Rapunzel; I felt like I was too aware that it was a pop star trying to be an animated character.  Mother Gothel was excellent, and Flynn was funny.  So it was good, I liked it, but it wasn't as good as the classic Disney movies.  For my money, Princess and the Frog is more of a throwback and has that old feel, but Tangled is a quality kids movie in its own right and leaves me laughing & singing the songs.