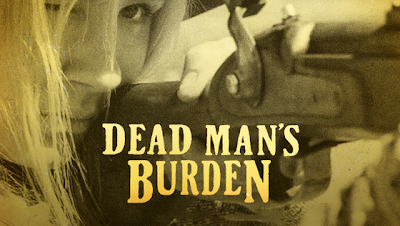 
Although I'm not a western aficionado, I've seen my fair share.  Films like Unforgiven, The Outlaw Josey Wales, Shane; the classics.  I'm not big on spaghetti westerns, I was always more of a John Wayne guy: The Searchers, The Cowboys, El Dorado.  So while it's never been my genre of choice, I do enjoy a good wild west tale.  When I came across Dead Man's Burden, it looked like a homage to the old stories; a simple plot, clipped conversation, beautiful sunsets, and a whole lot of death.  I didn't know if it would be up to par with the great desert dramas (Lonesome Dove) or sink to the bottom of the barrel (Texas Rangers).  I guess it shouldn't surprise me that it fell somewhere in the middle, teetering on the edge between subtle genius and farcical flop. 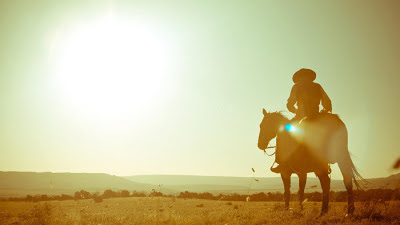 The story takes place on the post-Civil War western frontier.  The McCurry family has been attempting to scratch out a living in the dessert, burying sons along the way.  Wade, the only surviving brother, is disowned due to his supposed betrayal of the Confederate cause.  He has been long away from home, taking work as a deputy, but now wants to return to his farming roots.  His sister, Martha, remains on the family homestead, having married a good Southern soldier, Heck Kirkland.  The two siblings haven't seen each other since they were children and much has changed, but they are about to be reunited.

The pater familias, Joe McCurry, has died, leaving the future of the family's land up in the air.  Joe was for keeping the homestead, as it is the only acreage in the area that has a good supply of water.  Martha is for selling it to the mining company, making a good chunk of cash, and moving to San Francisco, leaving the dessert behind her.  She's set to make her dream a reality when Wade shows up.  He received a mysterious letter from his estranged father, saying that in the case of his death Wade would be needed back home.  Now he and his now-grown sister must decide the fate of the farm, a decision complicated further by Wade's suspicion that Joe didn't die from natural causes. 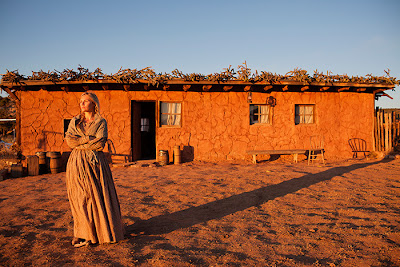 The story seems pretty simple, and perhaps even a little silly, but looking at the plots of other westerns puts it into perspective.  It's actually a pretty standard storyline; the fractured family unit, the greed that breaks them apart, and finally the conflict that settles the matter better than words seem able to do. So, in a way, Dead Man's Burden is the quintessential cowboy drama, using the old formula to make a modern film.  It doesn't rely on action and it definitely doesn't rely on breathtaking performances, but it does deliver a strong feeling of western.  Now, whether you view that as a rip-off or as a nod is a matter of preference.  Because this film seems to walking the fine line of believability.

I could see how, depending on their mood, someone could either love or hate this film.  It's a polarizing movie apparently, as audiences hate it and critics love it.  And it's because, as I've mentioned, it's right on the edge.  At times I felt like I was watching a very good portrayal of a deceptively simple plot.  What I was hearing were the standard western lines and what I was seeing were the standard western scenes, but they seemed to be genuine and classic at the same time.  But if I tilted my head slightly and tried to remember my high school days it was almost like I was watching a drama club performance.  I can't be sure if it was a classic rendition or a fake version, and I might change my mind the next time I watch it.

What wouldn't change would be the beauty of the scenery.  From the very beginning each shot seemed hand-crafted to be the most amazing picture you could imagine.  The sunsets were epic, the landscape was barren, the houses and dress were authentic, and it was very apparent that the director and his team took this film very seriously.  There were some breath-taking shots in this movie, as hopefully you can see from the few stills I incorporated.  It was a visually stunning film if nothing else.  And it may be more than that, it may be an extremely lovingly made western homage.  But there's still that edge that the cast was walking, on the verge of over-acting every scene.  I felt like they held back just enough and I bought into it.  But I couldn't blame someone for being harsh with this film and feeling as if they crossed a very subtle line.

Video - With an aspect ratio of 2.35:1, the video is everything you're looking for.  The film was shot on a Panavision Panaflex Platinum camera, with Panavision and Cooke lenses.  The scenes are beautiful and lit with an artistic flare.  The colors were made for an HD TV and you won't be sorry you watched this film from a visual standpoint.

Audio - There are two sound options on the disc: Dolby Digital 5.1 Surround or 2.0 Stereo.  English subtitles are available for the hearing impaired.  The audio quality of the film is good, not amazing.

Extras - There are few extras on the DVD.  You can watch four short deleted scenes, and there is a trailer for the film.  Nothing to get excited about and not much to see.

Rent it.  Dead Man's Burden is a nice throwback western that's not amazing but doesn't embarrass itself, although the visuals are better than the actual film.  You could make the case that the characters are too stereotypical and that the actors are overdoing it, but I think they toed the line and did their best to deliver authentic performances.  The video was great, the audio was good, and the extras were just OK.  Not an exciting film maybe, but a decent one.