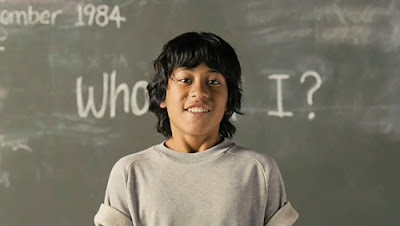 I had no idea that I had seen Taika Waititi's work before.  I chose to watch this movie thinking that it was a completely random film from New Zealand that got some good reviews.  While I was watching it, I thought that it reminded me of Eagle vs Shark, which is the only other movie out of New Zealand that I had ever seen. Turns out, not only did Waititi write, direct, and act in Eagle vs Shark, but he also went on to work alongside the main character of that movie (Jemaine Clement) in Flight of the Conchords.  Now fast forward to Boy and Waititi is once again acting, directing and writing a strange comedy/drama about the people of New Zealand, their awesome accents, and their unique culture. 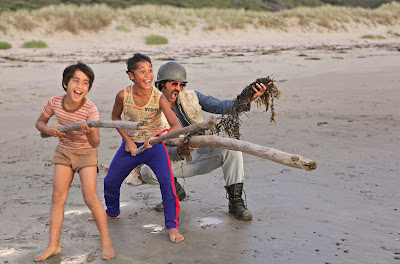 Boy is the story of Boy, a kid from a small town in New Zealand whose imagination is larger than the confines of his limited world.  He lives in a ramshackle house with his brother Rocky, a bunch of young cousins, and his grandmother, who sometimes leaves for large periods of time and puts Boy in charge.  He entertains his brother with fictional stories of how things came to be; how Rocky has magic powers, leading to the death of their mother in childbirth.  How their father escaped prison using only a spoon and plans to take them both to see Boy's idol in concert; Michael Jackson.  His life is predictable and boring, that is until his father comes home.

Alamein, the father, has been in prison but was recently released.  He and his new "gang", the Crazy Horses, have come home to find the money they stole and buried before they were caught.  Alamein has not been a part of Boy's life since his mother died, and Rocky doesn't know him at all.  But the boys attempt to reunite with their dad; going with him on drives, hanging out with his crew, and helping him dig for the buried treasure that he promises will buy them a better life.  But it's not easy to bridge the gap between years, and Boy becomes confused by his new-found family and his desire to be a man in his father's eyes, even when his father is no more than a boy himself. 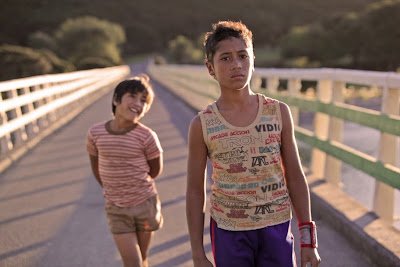 I was completely blindsided by this movie.  I chose to watch it on a whim, didn't have any expectations, and was totally surprised that it turned out to be an amazing film.  It was literally incredible; I couldn't believe that a little movie from New Zealand made me feel the way that this one did.  It was a perfect story of boyhood; of the sadness of loss, the hope of a bright future, the disappointment that comes from believing too strongly in the perfection of a parent.  It was heartbreaking really; Boy's attempt to force his father to love and accept him, Rocky's assumption that this strange man didn't want him or need him.  It was an emotionally charged film, made better by the amazing comedic content and timing.

It was funnier than I ever could have imagined.  The Michael Jackson references, the "gang" that was too ridiculous to know that they were ridiculous, the microwave that the kids assumed was a strange television.  The jokes were sometimes silly, sometimes subtle, but always spot on and well paired with a dramatic situation that needed some juxtaposition to make it bearable.  When I learned that Waititi had created both Boy and Eagle vs Shark I automatically compared the two.  They were similar in how they portrayed both main adult characters as juvenile and stuck in a world of play war & fantastic dreams.  But they were different in their comedic style.  The former uses timing and chagrin to make things funny; the latter uses awkward moments and ridiculous situations.  Both movies were good, but Boy took a step beyond good and became great.

It wasn't like I cried my eyes out at the end of the movie because I was so moved by the father/son story.  And it wasn't that I cracked up laughing the entire show, enjoying joke after joke.  I think the reason I liked the movie so much was because it found a balance between heartbreak and humor that is really hard to achieve.  It was moving but silly, making it not seem heavy while not seeming flippant.  I can only credit Waititi, since he basically did everything to make this movie what it was.  Maybe he learned a few things from his other projects, namely how to hold back while holding the audience's interest.  He held mine, and I'm glad I watched this film that I had never heard of.  I would watch it again right now, and I would surely recommend it to anyone who is even slightly interested. 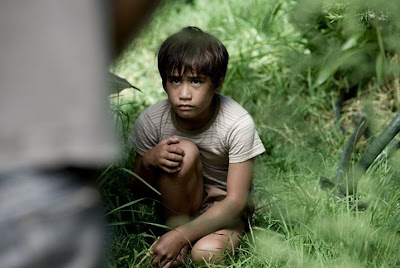 Video - With an aspect ration of 1.85:1, the video quality is what you're looking for from a modern DVD.  The picture was nice; not amazing, but nice, with no problems and no reason to be disappointed.

Audio - The disc has two audio options: Dolby Digital 5.1 or Dolby Digital 2.0.  There are no subtitles in any languages; the film is in English.  The sound quality of the movie was quite good, with creative and well planned music throughout.

Extras - There are a few nice extras on the DVD.  You can learn a little about the distribution company, Kino Lorber, in a brief section called About Kino Lorber.  There is a theatrical trailer for the film, a forty minute segment called Interviews and B-Roll Footage, and a short film by Taika Waititi entitled Two Cars, One Night. 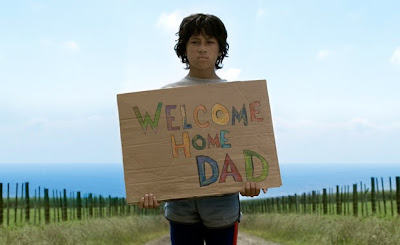 Highly Recommended.  Boy was an absolutely awesome film, more so for being so unexpected.  It had heart, it was funny, it was relatable, and it left me wanting to pop it back in and rewatch it.  The video was a good quality, the music was excellent, and the extras were fun to watch.  This movie comes highly recommended by a guy who is very glad that he now owns the DVD.