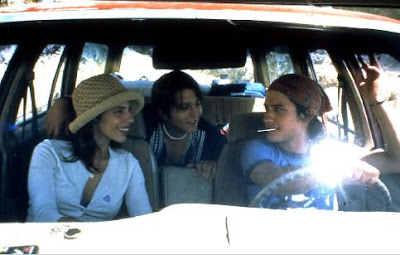 
According to popular opinion, Y Tu Mama Tambien is a phenomenal movie.  On IMDB users give it a 7.6 out of 10 and critics give it an 8.8, which is very high.  I always thought I was missing out on a fantastic piece of cinema by not watching it.  I wasn't avoiding it; I like foreign films and I don't mind "artsy" movies, I just hadn't gotten around to it.  So when I finally went to watch it I asked my wife if she'd like to watch it with me.  She said no, which surprised me.  Apparently she had seen it when it first came out and was not impressed.  She said it was all hype and no substance.  And she was right.

The story centers around two best friends; Julio and Tenoch.  They are rich young socialites whose college lives are about to start, but for now they just want to party.  When their girlfriends leave to go abroad, the boys focus on getting high and getting laid.  At a party they meet the wife of a relative, Luisa, a beautiful and intriguing woman.  The pair of adventures turns into a trio when Luisa decides to join the boys on a road trip to the beach.  As they all get to know each other, sexual tensions mount, inhibitions are lost, and friendships are torn apart.

First, this is a pretty explicit movie.  There are multiple sex scenes, starting from the very beginning, with a lot of male and female nudity.  Now, it wasn't an adult film, it was more like a movie that included more than we really wanted to see, like guys peeing.  And the movie was partly about the sexual awaking of these young men, so the sex was important to the plot, but I think it was overdone.  I say that, but without it I don't know what would have been left.  It was a boring movie, filled with stilted dialogue, and I don't understand why it's acclaimed.  Other than being shocking it doesn't have that much going for it.  The acting was fine and it had some realistic moments, but overall I found it to be uninteresting and over-the-top.  It was worth seeing, if for no other reason than to join the conversation, but I can't think of anyone I'd recommend this movie to.