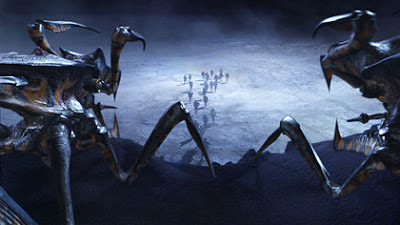 
So I started off my Starship Troopers marathon with the original; you can read the review by following that link.  I heart that movie.  It's everything I want a good b-movie to be; funny, gory, and satirical.  I've seen that one a handful of times, but I'd never watched any of the follow-up movies.  When I saw that Netflix had numbers two and three on Instant, I figured it was about time to pull out my DVD of the first one, give it a view, and then try my luck at the sequels.  I didn't imagine they would be very good, but hey you never know.  Well, you will not be surprised to know that the second of the series was fairly awful and was barely related to the first in any way.  It was bad, and I don't mean awesomely bad.

In Starship Troopers 2: Hero of the Federation, the war continues.  Humans are still fighting the Bug, waging a never ending war against the insect foe.  The movie starts with a brigade of troops trying to stay alive.  When they are surrounded, a small group escapes and races to the relative safety of a nearby outpost.  They find the fort deserted, non-functioning, and housing a captured alleged murderer.  When the Bugs find the base and surround it, the surviving humans must work together to guard their fortress and their lives.  However, it's not just the insects they have to deal with.  Strange troopers arrive, claiming to be from decimated units.  And as the soldiers begin acting oddly one by one, it becomes clear that danger lurks inside as well as out.

First, this movie has almost no connection to the first.  It's a different director, different cast, and it's actually not really about the human war on Bugs.  It's really a horror movie, and a bad one at that.  Characters live in a creepy fort that's almost always dark, they have strange visions, and weird things are always happening.  The insects are still the same, the uniforms, weapons, military jargon.  But it has a totally different feeling.  I like to call that feeling "crap", but I doubt that's what they were going for.  The acting was just abysmal.  And although the plot actually did make sense, I really couldn't have cared less whether the party survived or not.  It was a poorly made sci-fi/horror rip off, and I was left very disappointed that it wasn't nearly as good as the original.