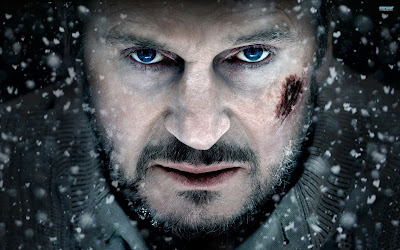 
I'm a big fan of Liam Neeson.  From Schindler's List to Love Actually, he's done some great films that warrant a lot of respect.  Now, he's done his fair share of bad movies: The Other Man, Battleship.  But, on a whole, he lends credit to the projects he's involved in and he's gotten me to see a few just because he's in them.  The Grey is one of those, a movie I might not have seen had it not been for Liam Neeson.  I might have watched it some day, I do like survival movies, and the whole plane crashing and having to defeat the wild thing looked pretty cool, but he definitely pushed my interest over the edge.

The main character, played by Neeson of course, works for an oil company in Alaska.  His job is to protect the workers on the tundra from starving wolves; he has studied them, knows their habits, and is good at killing them.  But his knowledge is truly put to the test when he and a small group of men find themselves stranded in a frozen wasteland.  Their plane has crashed, leaving them as the only survivors and desperate to live.  They must make their way to civilization, no easy task, but as they travel they are hunted by a ferocious pack of wolves bent on killing the men one by one.  In this struggle for survival one group must destroy the other if anyone is to make it out alive.

It's a pretty forced plot; a place crashes into an inhospitable environment where the wolves decide that every human must die and luckily the men have a wolf expert with them.  It's hard to believe it could actually happen, but that doesn't mean it's not fun to watch.  It was a pretty thrilling movie; guys getting picked off one by one, personalities clashing, wolves howling around the perimeter, never knowing what's coming next as you run for your life through the snow.  Maybe a little cheap, but very entertaining.  It reminded me of The Edge, which is a great wilderness survival movie that has excellent actors who turn it into something more than a animal/action flick.  The Grey was the same; a cool movie that had a good actor with the talent to make it a little better than it should have been.  Expect blood, snow, wolves, and a little cheesy heart-wrenching, but watch it just the same.