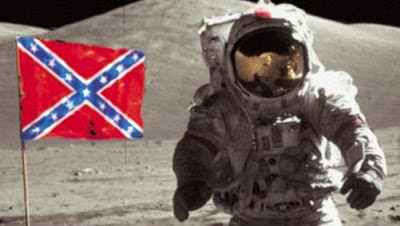 
I love post-apocalyptic, dystopian society, and alternate future stories. It's my favorite branch of sci-fi/fantasy. I'm not sure what it is, but there's something exciting about imagining how the world could be different, how it would be different if events would have changed. Now, I've read a lot of books and seen a lot of movies about this topic, but never one like this. C.S.A. takes alternate histories to a whole new level, giving us a biographical account of the way the future could have been shaped, and the extreme diversions from present day that would have occurred.

The story is presented in an almost mockumentary style, like a Christopher Guest movie with less silly parts. We've all had to sit through those History Channel original six-part series about World War 2; this film is made to look exactly like one of those, commercials included. However, the topic that it covers is the Southern victory of the Civil War, and the subsequent development of the Confederate States of America in which slavery is its chief economy. Historians relate Grant's surrender to Lee, the capture of ex-President Lincoln, the C.S.A takeover of South America, our alliance with Hitler, and the development of the modern slave trade. The alternate history of America is recounted in stirring detail and horrifying imagination.

What an unusual and extremely interesting film. I thought it was going to be a fictional story set in a Confederate future. But it turned out to be a documentary about the theoretical rise of Southern power and how it would have changed history. First off, it was more than mere conjecture. The movie was based on the plans Confederate leaders had for the future; from South American conquering to an economy based on slave production. The detail was frighteningly realistic; you could imagine how different our country would be had the war gone a different way. And it was also surprisingly funny, as extremely racist viewpoints are treated as every day life. The commercials in between the "documentary" were especially funny, and also especially inappropriate. Don't watch this movie if you're easily   offended, as you need to be able to take what they're saying with a grain of salt in order to be able to get the point, but C.S.A. has a great message that is told in a very unique way.