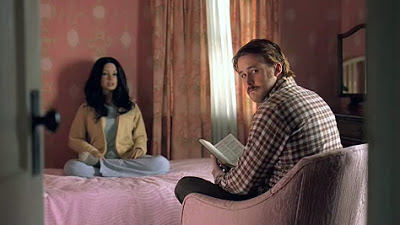 Ryan Gosling is much more than a pretty face. I mean, he's a bona fide hottie, don't get me wrong, but he's got amazing talent. Pair that with good looks and you've got a star. After seeing him in Blue Valentine, which immediately became one of my favorites and is one of the more realistic love stories you'll ever see, I was ready to proclaim him one of the great rising talents. And now having seen Lars and the Real Girl, that opinion has solidified into fact. So, as much as I enjoy the "Hey Girl" memes, I enjoy Gosling's incredible acting even more.

This film is the story of Lars, his family, the Fargo-esque town in which he lives, and his unique way of battling loneliness.  He is a shy guy. He goes to work every weekday, church every Sunday, and rarely speaks to another human in between. He lives in his brother's garage, having let Gus & his wife take the ancestral home. Lars is a loner and an extremely eccentric character, letting no one into his bubble. Until, one day, when he announces to his brother that he has a girlfriend, and asks if she can come to dinner. Of course, he fails to mention that she is a life-size doll that he ordered on the Internet. As his family and the town try to come to grips with this oddity, Lars begins to come to life and to face his problems, a feat that he cannot do alone.

It must sound odd, and believe me it feels odd to see Lars sitting next to "Bianca" for the first time, even when you know that's what the movie is about. But that strange feeling soon fades away. For some unexplainable reason I fell in love with Lars right from the very beginning. Maybe it was his vulnerability, or maybe it was Gosling's great portrayal, but I wanted Lars to fight through his problems so badly that I, like the characters in the movie, was able to accept his strange coping mechanism and hope for the best. Schneider was excellent as well as older brother Gus, even shadowing some of the strange tics and mannerisms that Lars portrayed. The movie was funny, interesting, and moving. By the end it started to get a little like a Lifetime original movie, and that's not what you want, but I forgave the final faults because I was so invested. I'd be interested to hear a clinical professional's opinion, but for me it was an engaging film that left me with a good feeling.