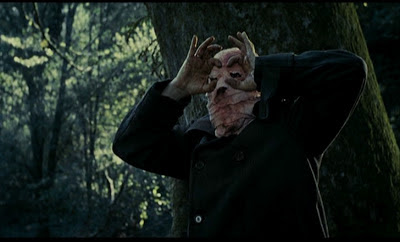 I didn't know much about Timecrimes when I went to watch it.  I knew it was in Spanish, it was a thriller, and it was about time travel.  Sounded pretty cool, so I figured some day I would give it a chance.  I had no idea what a mind-blowing movie it would be.  It reminded me of the first time I saw Black Swan.  I left the theatre thinking three things: wow, what just happened, and I've got to watch that again.  The same feeling hit me after watching this film; it's just one of those that you never saw coming and you're very glad you took a chance on.

The main character of the film is Hector, an average balding guy who just returned home with the groceries and who enjoys sitting outside in the yard with his binoculars.  When he begins to see strange shapes and colors in the woods he decides to investigate.  Turns out not to be such a great decision.  One insane event after another lead him step by step to some sort of laboratory near his home, and as Hector plods along fate seems to be pushing him toward a young man, a machine out of a sci-fi movie, and a future that can only be described as altered.

Please watch this movie, if only so that I can have one more person to talk about it with.  I'm still not exactly sure what happened, and that's a really cool feeling to have after a weird film like this.  The plot was so intense and deliberate, and figuring out what the hell was going on ended up being half the fun.  But it didn't just rely on tricks to keep my attention.  It was alternately funny, horrifying, bizarre, depressing, and generally well done.  It's a thought-provoking film, that's for sure, and one that will stick with you for a while.  Do yourself a favor and check it out.