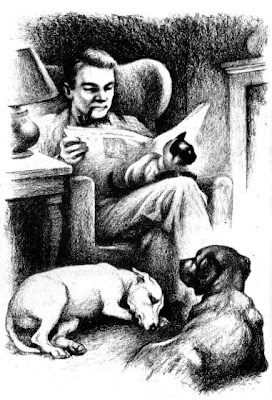 When I was ten I loved the movie Homeward Bound: The Incredible Journey.  It was about my favorite thing, dogs, with a cat thrown in.  I knew it was based on a book and that it was a pretty loose interpretation, but that didn't bother me at the time because I had never read the novel.  The movie was based on the idea of companionship; the love the animals had for their human owners and also the love they had for each other, a bond of friendship that kept them together through a very difficult trek across a vast wilderness.  It spoke me, as a kid who loved animals, and I had no doubt that the book would have the same effect when I finally got around to reading it.  Well, here I am, almost thirty, and now I have read the book to my children and we all enjoyed it together.  After having watched the movie, the novel was all I imagined it would be and then some.

The story takes place in the sparsely populated forests of Canada.  The three animals are boarding with a writer, John Longridge, while their family is abroad in England.  They are Tao, the independent Siamese cat, Bodger the elderly English bull dog, and Luath the young Labrador retriever.  When Longridge goes on a hunting trip, Luath decides that he can wait no longer, that he must get back to his master by the most direct route possible; due west.  He takes his companions with him and acts as their leader, keeping Bodger going when it seems like the old dog can't walk another step.  The trio fight against bears, battle constant hunger, cross raging rivers, and find friendship along the way in the most unlikely places.  Their mission is to get home, no matter how long it takes or what the cost.

It was an incredibly beautiful book, in many ways.  First, the story was touching and very realistic.  The animals weren't humanized, they were written in a way that any pet owner can recognize as being truly accurate.  The love they showed for each other and for the humans in their lives reminded me of the love I had for my animals throughout the years.  I was pulling for them the entire way, hoping that they would make it against all odds.  And the writing was excellent as well.  At times it was almost poetry, describing the animals in nature, the way the land lay, the lonely people in a lonely place.  I was sucked into a world I have never seen, the rough landscape of the northern woods, and the danger that waits there for anyone who doesn't know its secrets.  All in all, a very enjoyable book that deserves to be read early and often.