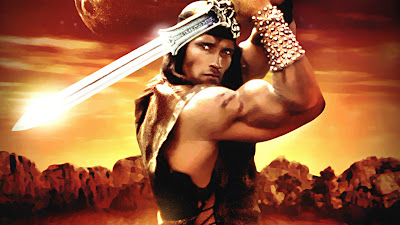 
Although it's a sequel, you don't necessarily have to watch the first film in order to enjoy Conan the Destroyer.  But just for reference, Conan the Barbarian came out in 1982 and set the scene for the Conan adventures.  Based on the stories of Robert E. Howard, it tells the tale of the young Cimmerian who sees his people slaughtered by the evil Thulsa Doom.  On a revenge quest, he meets the thief Subotai and the brigand Valeria, who he eventually falls in love with.  It's a good movie on its own, featuring James Earl Jones as a wicked king who can turn himself into a giant snake.  Anyway, the second film and others, like Red Sonja, would come about afterward, helping to launch Arnold's career and to start a trend of 80s fantasy films.

In the sequel, Conan is back at his thieving ways.  He and his companion Malak rob unsuspecting merchants while Conan mourns the loss of his beloved Valeria.  When a queen promises him that she can bring her back from the dead, he is willing to do anything to make that dream come true.  His mission is to accompany a beautiful virgin on a dangerous quest.  Princess Jehnna must retrieve a sacred jewel and she needs Conan and Malak to help her.  Also along for the journey are the wizard Akiro, the warrior Zula, and the bodyguard Bombaata, played by Wilt the Stilt.  The party's adventures are treacherous, but little do they know that the evil Queen Taramis does not intend to keep her oath to Conan, nor does she want him to come back from the mission alive.

You probably know what to expect from a movie like Conan the Destroyer.  It's not surprisingly good, nor is it that bad.  It's a cool, dated fantasy movie that has very little dialogue; it's made up mostly of fight scenes, magic casting, and rides through the countryside.  The characters are basically mannequins wearing costumes; you won't get much acting out of this bunch.  But it was fun to see some actors in the early parts of their careers: Arnold as Conan, Grace Jones as Zula, Wilt as Bombaata, d'Abo (who would later become Karen Arnold on The Wonder Years) as Jehnna.  And there were some enjoyable scenes with monsters, bravery, sorcery, escapes, attempts at comedy.  As long as you go into it knowing what you're going to get you're bound to have a good time despite many flaws; just don't judge it too harshly.  After all, people did some weird stuff in the 80s.