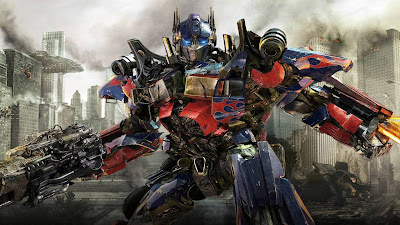 
I really need to stop watching action movies.  I'm always tricked into thinking that they just might be good if they throw in a sci-fi or fantasy element.  But no, they're still crap.  And the sad part is, I don't think they have to be.  Transformers are awesome.  Blowing things up is awesome.  Toss in a little comedy and you've got a passable movie.  It worked for the first film of the series, just do that again for the second and the third.  But apparently that's easier said than done, or maybe the recipe just got too old.  Whatever the reason, Dark of the Moon crashed and burned.

Good ol' Sam Witwicky is up to his usual tricks again; palling around with the Autobots, kissing the hot girl, trying to save the world.  But this time, it might not be as easy as ...the other ...two times.  The Autobots are still living on Earth, their sanctuary after their home planet was virtually destroyed.  Their enemies, the Decepticons, are in hiding, waiting for their moment to strike.  Well, that moment has come, as the original Prime, Sentinel, has been uncovered and with him a powerful weapon that has the ability to create doors through time and space.  If the Decepticons gain control of this invention, they will conquer the world, and the Autobots cannot let his happen.  With the help of Sam, his girlfriend Carly, and some old pals, Earth stands a fighting chance in what should be the final war in this epic saga.

I consider myself a smart person, but I was basically lost after about thirty minutes.  The plot is so thin that you can punch a hundred holes in it; it almost feels like they're making it up on the spot.  Even the beginning, where we learn that the moon landing was actually a government ploy, was a complete butchery of what could have been an interesting set up.  But no, instead of making a cool movie about robots that I am hard-wired to love, someone decided to throw in every cliche, every cameo, and every sophomoric joke that they could think of.  Thanks.  And wow was the acting bad.  Shia is funny sometimes, he's got natural likability, but his girlfriend was played by a model, Josh Duhamel can't act to save his life, and the rest of the cast is merely delivering lines that they've got to know are awful.  If you've only seen the first film, you should probably stop there.  The second is incredibly worse, and the third is hard to even watch to the end.  Spare yourself.  Stay away.