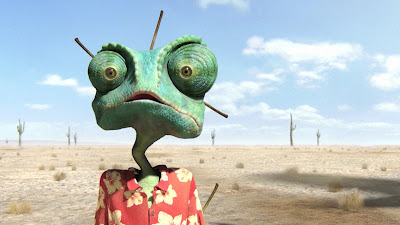 
Rango was the winner of You Vote, I Review this week.  That poll doesn't appear on the mobile version of my blog, so in order to participate you've got to go to my actual blog site.  Every week I put up five movies that I'm interested in and you vote on which one you want to see reviewed.  Sometime during the next few days I'll review it and put up more choices.  So check back often and vote!  Anyway, Rango.  I'm not big on animated movies, unless they're Disney classics, but I wanted to give this one a chance.  I liked the paring of Verbinski & Depp, who worked on Pirates of the Caribbean together, and I thought it looked like it would have a fresh take on the old western theme.  I was prepared for some physical comedy and cool visuals, and that's exactly what I got.

The story starts with a pet chameleon inside a terrarium.  When his world is shattered, literally, he finds himself alone and quite hot in the middle of the Mojave desert.  Heeding the advice of a wise old armadillo, he heads deep into no man's land searching for a town.  When he finds it and meets the residents of Dirt, he realizes that this is his opportunity to be anyone he wants to be; to create a history, a story, and a name that will be totally his own, if completely fictional.  Things begin swimmingly for the chameleon, who now calls himself Rango, until the problems of the town come to a head.  The water is running out, people are leaving, and the kindly mayor seems to hold all the cards.  Rango must unravel the mystery of the disappearing water in order to save the town, his new job, and the townsfolk, who are beginning to count on him in ways he hadn't considered.

First off, Rango was visually amazing.  I can't imagine the work that went into every scene, every shadow, every tiny detail.  It was incredible just to see the talent and time that must have been poured into this movie.  If you have a nice TV do yourself a favor and watch Rango on it, just to put it to the test.  And the visuals aside, the movie itself was quite good.  It was really funny in a non-kid sort of way.  Not to say that it was adult, there were a ton of silly jokes and slap stick humor, but I can't see a lot of little kids enjoying it as much as a Disney princess movie.  I liked the classic western theme, and there were some cool cameos and homages to other films.  By the end, I was getting a little bored and ready for the story to come to an end, as the humor was left behind for some attempt at drama and depth.  I guess I could have done without that, since that's not what I was watching the movie for, but it didn't take away from the entertainment value of the film too much.  I recommend watching Rango for an enjoyable evening and for something you don't see every day.