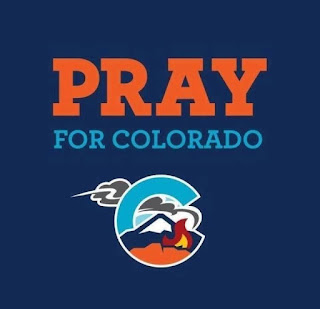 First off, I love the state of Colorado.  I have friends & family there, I've visited & found it to be extremely beautiful, and I even root for their sports teams.  And I actually really like this logo.  It catches the eye, it incorporates Broncos colors, and states its message clearly.  Whoever started the Pray For Colorado campaign knew what they were doing.  What I have an issue with is the idea of prayer, and this happens to be a clear example.

Let's assume this message comes from a Christian viewpoint.  That's the major religion in the US, broken down into many different sects and denominations.  So Christians in Colorado are asking other Christians to pray for them.  Sounds fine, but why?  What's the point?  What can prayer possibly do?  We'll put aside the idea that God may not exist at all, cause these people obviously think he does, and we'll just focus on the question of prayer.

Many times in the Bible it is stated that God knows all.  He knows every single person that will ever live on Earth before they are born, he knows what all his works will be, and he's basically omniscient.  So it's not like praying to God is going to alert him to the fact that there's a wildfire in Colorado.  God doesn't need Twitter to get news; he has always known.  And he's not going to save animals, trees, and neighborhoods because people pray and ask him to; he's got that all planned out, for all we know that wildfire has a purpose in the greater scheme of things.  You're not going to sway God one way or the other by just asking for something.  So then, what's the purpose of prayer, if God already has things decided?

And there's the problem; putting your religion into something physical messes up what you're actually trying to say.  What people really want is for others to think about them, to empathize with them, and maybe to help them out a little.  So why not just say that?  Why not just say, "Hey, Colorado is going through some tough times, what with the shootings we had and all these wildfires.  We could use a little support, cause we feel a little alone out here."  That would be so much more honest, and it wouldn't bring up the question of whether God might actually plan for horrible things to happen.  That's a topic for another day, if we ever figure out whether or not he's really up there.  But for now, I think we can assume that God doesn't change his mind because a photo gets a million FaceBook likes, or a million prayers for that matter.  Praying is fairly pointless without action, and ironically it seems to be the action that usually gets things done.
Posted by Olie Coen at 11:40 AM