I've never seen a Brazilian film before.  I'm not even sure I've seen a South American film before.  I guess, for a person who considers himself open and experimental when it comes to movies, I haven't seen that many foreign films.  I mean, I've seen more than Joe Sixpack over here, but I definitely specialize in modern American film.  So when I heard that Neighboring Sounds may be the best movie to have ever come out of Brazil, I had no way of judging whether or not that was true.  I knew I'd just have to watch it, try my best to appreciate it, and not compare it too much to the cinema that I'm used to.  Well, it turns out that greatness speaks for itself, in whatever language. 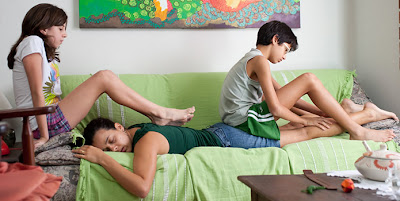 The story takes place in Recife, Brazil.  The characters live in a fairly nice neighborhood, an area filled with condos, gated houses, and apartments.  Their lives are not that extravagant, they are a sample of the average community that could be found all over the world.  One of the main characters is Bia, a stay-at-home mother of two.  She spends much of her day cleaning, spending time with her children, feuding with her sister, smoking pot, and attempting to silence the extremely noisy neighboring dog with whatever means necessary.  Also living in the area is Joao, a good-looking, single, realtor.  He spends his time showing condos, visiting his father and grandfather, chatting with his house maid, and dating a new girl to the area, Sofia, whom he has come to have some very strong feelings for.  Their lives are not heroic, but are interesting in their simplicity.

Things get shaken up in this quiet community when Sofia's car is broken into.  Joao suspects his own cousin, a strange young man with odd habits, but a member of the family nonetheless.  He is protected, in a way, by the money and power that Joao's family has in the area, as everyone respects and listens to his grandfather, Francisco.  And when a group of night watchmen form a fledgling security firm, Francisco is the man they must approach in order to be accepted.  The community takes them on as guards, fearful of more robberies and feeling just a little safer at night.  But all is not well, as the new members of the community bring their own problems to the group, creating a tangled network of issues, histories, and fears that complicate what seem to be simple existences.

If this film is what I should expect from Brazilian cinema, then I need to be watching more of it.  And if it's the best movie to ever come out of the country, I still need to give the rest of them a chance.  This was an surprisingly wonderful film, one of those that you just never see coming.  The director originally created this story as a short film, which you can watch on the DVD.  He wrote the script in 1994, shot it in 2004, and released the feature length version in 2012.  The short follows only Bia the housewife, and doesn't involve Joao or the neighborhood.  Some of the events are the same in both films, and the short serves as sort of a guideline for the feel of the feature.

It's not coincidental that the short is about Bia, because she becomes the focal point of Neighboring Sounds.  She is a tremendously interesting character.  Her life seems pretty boring; vacuuming, waiting around for delivery men, doing the laundry.  But there's a desperation under the surface that's really easy to connect to.  The director uses the dog who's driving her crazy to show us this tension, as barking becomes a constant pressure in her life, a driving force for a lot of her actions.  The actress who played Bia could not have done better; she was intense and frustrated, human and likable.  The same could be said for almost every actor/character in the film.  They were just so believable, so easy to relate to, that you fell into this world and never doubted it for a second.

But we can put the story and the characters aside for a minute, because they actually weren't the important parts of the movie.  The film plays a lot with sounds, giving us real examples of everyday sounds that we sometimes tune out and that sometimes drive us crazy.  And the director uses not just sound, but other senses to bombard us with physical sensations that force us to feel a certain way.  A scene that is extremely uncomfortable, a shocking moment, a beautiful image, a boring silence; it was as if our emotions were being played with, but in a good way.  The film was all about sensationalism, relying not on the content of the message but on the way it was delivered.  By the end of the movie, I realized that I had felt more during ninety minutes than I usually do in a whole day.  I felt a waterfall hit my shoulders, I was hot on a summer day, I was in an elevator in silence, I was annoyed by a dog, I was sad for a friend.  And that's what was so great about this movie; some try to get you to feel one thing, but this one made me feel a hundred.

Video - With an aspect ratio of 2.35:1, the quality of the video was everything you could ask for.  The picture was crisp and the colors were great.  The neighborhood was a perfect location to show off some nice camera work, and the architecture of the city was superbly shown on film.

Audio - On the DVD you have the option of Portuguese 5.1 Dolby Digital or 2.0.  There are also English subtitles.  The sound quality was excellent, and the director used sound and silence in many ways to create moods and to force us into feelings.

Extras - There are quite a few extras on the disc.  You can watch the film with audio commentary by Kleber Mendonca Filho.  There is the short film that I mentioned, called Electrodomestica.  There are three deleted scenes that can be viewed separately or all together.  And there are nine trailers: Neighboring Sounds, Leviathan, Night Across the Street, The Law in These Parts, The Day He Arrives, Patience, Once Upon a Time in Anatolia, The Turin Horse, and Aurora. 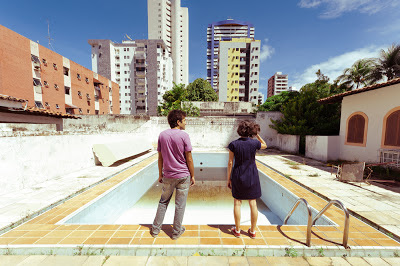 Highly recommended.  This film surprised me, and I'm so glad it did.  It was an interesting and physically stunning piece of art, one that started out being about the characters and ended up being an attempt to make us feel.  Be it love, fear, heat, shock, amused, aroused; you can't watch this movie without feeling something.  The video was superb, the audio excellent, and the extras plentiful.  A wonderful film that I could watch again right now.