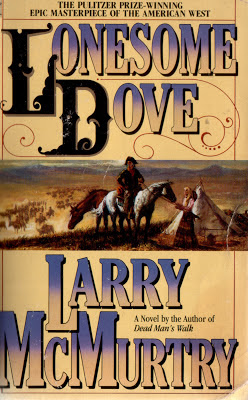 
When I was young my dad & I loved the Lonesome Down miniseries.  It ran in four parts, and was a total of over three hours long.  Of course, now you can get the movie on DVD and watch it all at once, and in that way it's fairly similar to other historic epics.  But the difference between Lonesome Dove and movies like Braveheart or Gettysburg is that it's not based on true events.  It was adapted from a fiction novel written four years earlier by Larry McMurtry under the same name.  So twenty-some-odd years later, I finally got my hands on the book that inspired the film that I love so much.  It's always tricky reading the book after having seen the film, especially when that film is one of your all-time favorites.  I was worried that the book just couldn't live up to the story and the characters that I love so much.  But apparently the miniseries was even more excellent that I knew, as they stuck to the novel almost exactly and brought to live what was already written so well.

Lonesome Dove is a tale of the wild west.  Living in Texas on the Rio Grande in the 1870s, two former Rangers are living out the rest of their days as cattlemen.  Their names are Augustus McCrea and Woodrow Call, and in their younger days they were fearsome Indian fighters, protectors of the settlers, and basically the law of the land.  Now they have nothing to do other than to raid into Mexico and steal cattle.  But when their old companero Jake Spoon arrives in the small town of Lonesome Dove, he excites their old spirit of adventure with stories of Montana; a land so beautiful, wild, and free for the taking.  The crew decide to start a cattle drive, with hopes of becoming the very first ranchers ever to settle in Montana, a feat that will make them all rich men.  Along for the ride come Deets (the trusty scout), Pea Eye (the stolid worker), Newt (the unclaimed boy), Dish (the top hand), Lorena (the former whore), and a whole group of other cowboys.  The entirety of the mid-west lays before them, but so does danger, as they must survive in order to enjoy the wonderful northern country that has become something more than simply a goal.

Well, I loved the movie, so perhaps I'm biased, but this novel was one of the greatest I've ever read.  It was just so simple; a cattle drive, a few lowly cowboys, the open prairie, some bandits.  But that's what made it great.  So often today's stories are so forced, so contrived.  This one wasn't.  It  was honest, harsh, dry, but somehow beautiful.  Perhaps it was the description of the country the characters crossed, an American that was wild and murderous and fresh.  Or perhaps it was the characters themselves, written so well that you could almost predict what they were going to say next.  By the end I felt like I had traveled every mile with the boys, had crossed every river with them, had borne every heartbreak.  I just couldn't get enough of this sad and lonely tale.  It might not be for everyone, because I know some people don't like Westerns, but if you're willing to give it a chance Lonesome Dove has the power to sweep you away and show you a fascinating time that has never been depicted better.