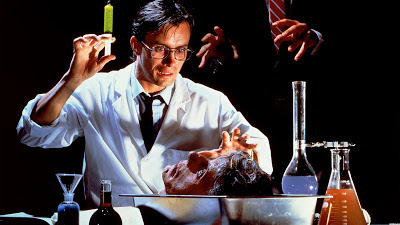 
I've talked a lot on here about b-movies and cult classics, and while I really enjoy the genre I understand that it's totally hit or miss.  You've got to sift through a lot of trash in order to find something worthwhile, and it doesn't always seem worth it.  Take Surf Nazis Must Die for example, a movie that I'm sorry I ever watched.  It's a classic, but it doesn't deserve the title.  Yes it was bad, but it was so bad that I felt my brain melt a little.  But in a strange way I'm still glad I watched it; now I know and maybe it helped me to appreciate good b-movies even more.  I put that theory to the test while watching Re-Animator, another wacko cult classic that I hoped would be wonderfully terribly and strangely amusing.

The story begins with young love.  Dan is a med student who has a tough time losing patients.  Megan is his girlfriend who is there for him no matter what.  And even though her father is the Dean and would expel Dan if he only knew what went on behind closed doors, the couple vow to be together forever.  But things begin to get weird when a new student arrives.  His name is Herbert West, and he has some bizarre ideas about what is medically possibly.  He believes that he has developed a way to bring back the dead, and with Dan's help he aims to test his theory on humans.  Well, the results are not what the team intended, and death has never been so difficult.

Now that's what I'm talking about.  Finally, a b-movie/cult classic that lives up to its fame.  It is odd, goofy, creepy, hilarious, over-acted, and highly entertaining; exactly what I was looking for.  Now, it's still bad of course, but bad in a good way, bad in a way that makes it fun not stupid.  And if you want gore, look no further.  Dismembered cats, walking corpses, headless bodies, exploding chest cavities, you name it.  But again, it's comical, it's ridiculous, and ultimately it makes for an enjoyable experience if you can stomach the blood.  There are many other films in the Re-Animator series, but this is the one that started them all and it deserves cult classic status.