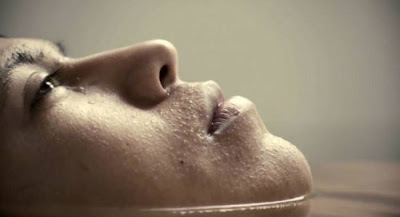 
You never know what you're going to get from a first time film actor.  They could have "it" or they could be dead wood.  And it's especially unpredictable when they have no previous experience whatsoever.  Joel Evans had never acted before, never had a lesson, and yet was approached by Anita Doron and asked to audition for the lead role in The Lesser Blessed.  Evans is from Fort Smith, Northwest Territories, Canada, the same home town as author Richard Van Camp who wrote the novel of the same title from which the film is adapted.  Incidentally, the novel is Van Camp's only full-length book.  So we have a writer who has only written the one book, an actor who has never acted, and a director who is roaming the streets looking for someone who might want to try being in a movie.  I wish I had known all this before I watched it, because it would have at least alerted me to the possibility that this whole film might be a complete failure and that I might want to avoid it. 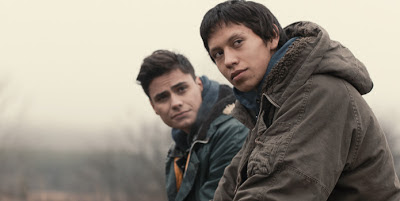 The film is based on the life, past, and angst of teenager Larry Sole.  Larry is a member of the Dogrib First Nation people, a native tribe from northwest Canada.  He and his mother live in Fort Simmer, where Larry attends the local high school and his mother obsesses over a man named Jed.  He is, in many ways, a substitute father, as Larry's real dad is history.  A tragic event, which Larry calls his "accident", is responsible in some murky fashion for his current position; new town, no dad.  But Jed has issues of his own, and will bolt into the bush whenever he is faced with confrontation, which is not what Larry needs right now.  He is a self-loathing mess, spending much of his time listening to heavy metal, practicing the drums, avoiding eye contact, and hiding his scars.  It's not apparent at first why, but Larry has serious burn marks, and his "accident", his father, his past, and his current troubles are all wrapped up in a knot that is likely never to come loose.

Enter trouble in three different forms, all more confident and volatile than Larry.  First, Juliet Hope, the angel of his daydreams.  Juliet represents all that is beautiful and perfect; her blond hair, her pale skin, her kind manner.  But she hides a disastrous desire to be loved that is not easy to fulfill.  Next, Darcy McManus, the joker/punk/bully/jerk who knows the secrets of Larry's past.  Darcy picks on him relentlessly, frightening him with fire, and treating him as if he were less than dirt.  And finally, Johnny Beck, the new kid and the only person who seems to like Larry.  Johnny sticks up for him, teaches him to fight, makes him feel cooler than he's ever felt before.  But this new-found confidence will lead to more trouble than it might be worth.  When the gorgeous Juliet falls for the suave Johnny, Larry becomes the third wheel.  And when the group begins to enter into the cool world of sex, drugs, and pseudo-adulthood, Larry finds himself in over his head, forced to confront all the issues that have held him back and stopped him from loving anyone, especially himself. 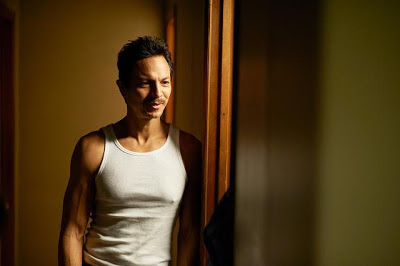 You can probably gather from the summary that the plot of The Lesser Blessed is a little bit contrived.  It just feels like we've seen it all before; the loner, the hot girl, the new kid, the big bully, the daddy issues, the weak mother, the high school teachers, the school dance.  It's not like the film is 10 Things I Hate About You, but you get the point.  It's a dramatic take on a tired storyline and the result is that it doesn't feel very honest.  I wonder how the book reads, and if it feels more like the autobiography of Van Camp's life, as opposed to the movie, which feels like a cheap knock-off.  If Larry is supposed to be Van Camp then that explains a little; perhaps these cliche things really did happen to him.  After all, cliche things are cliche because they happen.  But regardless, it just didn't translate into a feature film, because this isn't a big Hollywood production, which seems to be the only way we can forgive recycled plots.  Maybe that's our problem and it's a double standard, but that doesn't change the fact that we expect something unique from a film festival movie.


With all the amateurs involved in this film, the director was even more important than usual.  There was no falling back on the talent of the veteran actor or the well-known novel or the original plot, because those things didn't exist in this movie.  There was a lot riding on Doron's shoulders as the only experienced player in the game.  Unfortunately, it seems like all the pressure got to her.  The movie was over-directed, quite simply, although I'm not sure if the alternative would have been any better.  The film was too reliant on an artificial mood created by the director and not enough on the emotions of the actors.  Again, I understand why, but that doesn't make it a good thing.  The result was that every scene seemed so incredibly heavy and overbearing.  The music, the voice overs, the cold locale; everything was produced to be dramatic, and it was just too obvious.  Because you could see all the work that went into trying to make the movie believable, it was of course not believable.

There was one piece of the film that could have fixed the plot and direction problems, could have made them fade into the background, and that piece was Joel Evans.  As the center of all the action and emotion, a great performance from him would have swept away all my doubt in the production of the film and allowed me to really buy into the story.  Well, that didn't happened.  Evans isn't an actor.  He just isn't, and although he looks the part, he was never up to the challenge of supporting such a complicated role and pivotal character.  He came off as more of a set piece than an actor, with a wooden performance that lacked any sort of believable emotion.  I was never rooting for Larry, never hoping his dreams would come true, and that's a major problem.  He was even supported by a pretty nice cast; Benjamin Bratt giving perhaps the best true performance I have ever seen from him, and Adam Butcher playing Darcy the bully perfectly.  But it just wasn't enough; you can't really overcome a bad script, heavy-handed directing, and a lead actor who just seems to be phoning it in. 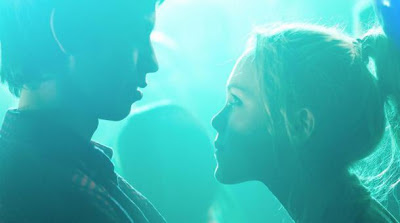 Video - With an aspect ration of 16:9 widescreen, the picture quality was just fine.  The video was produced and edited well, it just didn't have a chance to shine.  Much of the movie is drab and cold, not really providing much opportunity for a high quality picture to show off.

Audio - The sound is done in 5.1 surround, so that's fine.  But there are no audio options on the DVD; no language selections or sound selections.  There is, however, a Descriptive Video Track, which can be turned on to run with the film.  It provides a mix of the dialogue with some scene narration during natural pauses, intended to enhance the experience of the visually impaired. 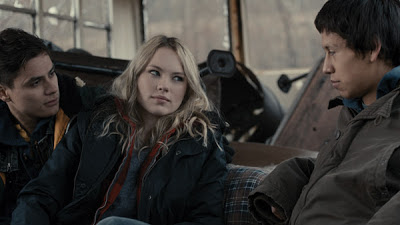 Skip it. There just aren't enough positives to recommend this film.  It wasn't horrible, but it just had too many problems.  The directing needed to be lighter and the lead actor needed to be better, simple as that.  The video, audio, and extras were all fine, but unimpressive.  And that's a good word to describe the whole film, as it didn't leave me with much to remember.  Fondly, at least.