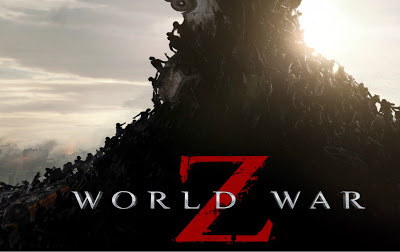 
We've seen zombie movies done a ton of different ways.  There are silly ones, gritty ones, disgusting ones, old school versions, new takes, and everything in between.  Even the zombies change from film to film.  You've got your slow-walkers, your run-and-jumpers, and your ghosty-creepers.  The point is, there are thousands of zombie movies and it's a big, varied genre.  And we all know a guy that takes it way too seriously.  He's seen every version ever made and he has an actual plan on what to do in case the undead take over the Earth.  People, for some reason, really buy into zombie movies and they go to the theatres to see them.  I, for one, have seen a bunch, and was excited to see a new and interesting vision of a standard plot.  I heart Brad Pitt, so he can do no wrong in my book.  And I like the projects Marc Forster has done before: Monster's Ball, Finding Neverland, Stranger Than Fiction.  But those weren't horror movies; they weren't even action movies.  He did direct Quantum of Solace, which got mediocre reviews, but I was curious to see what he and Brad could do together and if they could breathe life into yet another zombie movie.

World War Z is based on the novel by Max Brooks.  The story of the film follows retired UN agent Gerry Lane and his family as they attempt to stay alive during a zombie apocalypse.  No one knows when the virus started, or where, but the outbreak has effected the entire world and is spreading quickly.  Once bitten, a person turns into a zombie as well, and goes hunting for other humans to infect.  When the disease strikes Philadelphia, Lane helps his family to escape the city, reuniting with his old boss on an aircraft carrier in the Atlantic Ocean.  All he wants is to stay with and protect his wife and daughters, but the U.S. military has other ideas.  They want Lane to go back in, to fly across the world in search of the origin to the virus with the hope that knowledge will be the key to destroying the zombies and keeping the entire world from being infected.  Lane begins a mission that is almost hopeless, battling the undead along the way, and fighting against all odds to get back to his family again. 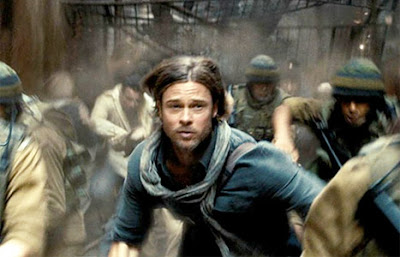 It's a story we've seen before and well done: Dawn of the Dead, 28 Days Later.  But that doesn't mean it can't be done well again.  And it was, pretty much across the board.  Brad Pitt is the quintessential American hero; I don't know what it is about him but we'll believe him in almost any role.  He played Lane well, the tough guy who can do what it takes but who has a soft compassionate spot.  Forster's direction was good as well; no glaring problems, the movie flowed well, and there was enough humanity to counter-act the level of violence and destruction.  The special effects were nice but not over the top.  The scenes inside the infected cities were really realistic and terrifying, without being silly or unbelievable.  I was invested in the story from the beginning, and I enjoyed watching a well-made zombie movie.  Pitt and Forster were a good combination, and they brought some respectability to a genre that can loose control of itself at times.

However (and maybe you saw this coming), the movie wasn't great.  It just wasn't spectacular.  It's hard to point to any one piece and say that it failed, because I don't think there were any giant mistakes or weaknesses.  Maybe the side actors were just OK, but they didn't really detract from the film; Brad Pitt was the only character that really mattered.  The problem seemed to be that the movie lacked punch.  It wasn't gory, which surprised me more than anything.  It wasn't even that violent; death was handed out casually without much detail.  The zombies themselves weren't even that terrifying, except maybe for one close up scene.  The whole film just seemed a little watered down.  Maybe that was intentional, as a PG-13 rating can reach a lot more viewers.  It makes sense that they don't want to gross too many people out and lose an audience, but by not being gruesome they lost out on some realism, as well as some points among zombie aficionados.  If the filmmakers were shooting for some sort of middle ground between Hollywood and b-movie, I guess they succeeded; it wasn't a complete sell out and it also wasn't just a gore-fest.  But I could have done with a little more brutality, both from the zombies and from the breakdown of cultural order.  It was a good movie, I had a good time, but as an adult who enjoys zombie movies, they could have gone farther. 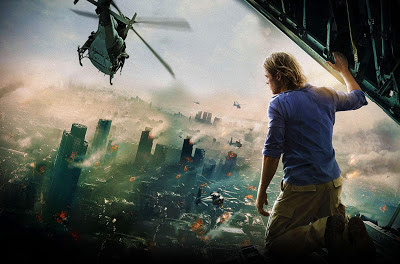