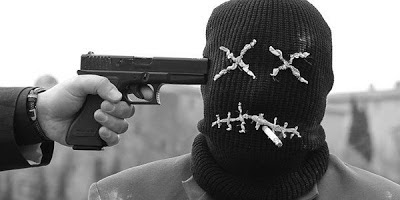 
As a filmmaker, if you're going to create a spoof you had better make it near perfect.  First, you have got to know the genre that you're poking fun at inside and out.  Second, you've got to make it funny but not stupid.  And third, you better not bore us with the details.  Audiences have a certain responsibility when watching spoofs as well.  We had better know the genre at least fairly well, we ought to be prepared for a little farce humor, and we should try to accept certain flaws as inevitable.  Dead in France is advertised as a film noir spoof, filled with cold killers, sexy broads, dumb criminals, exotic locales, vindictive hit-men, and plot twists, all done in black & white.  And while the first few minutes lived up to the label and got me on board, the remainder of the film showed just how difficult it is to pull off a perfect parody.

The main character of this bloody story is Charles, a professional hitman, a neat freak, a loner, and a seemingly nice guy.  He is an immaculate pro who is good at what he does, as opposed to loving every minute of it.  A Brit by birth, his temporary home is on the coast of France, but he has hopes to someday own a yacht and sail around the world.  As his 100th kill approaches, Charles contemplates the choices that he has made thus far in his life, wondering if a trained murderer can turn over a new leaf and become a changed man.  However, not everyone in the business is happy that this will be his last job.  Charles has made enemies, including an old associate named Burgess and a competitive lady killer named Clancy, neither of which have any reason to love the man and every reason to want to kill him as he attempts to ride off into the sunset.

All these troubles Charles could probably handle on his own.  After all, he is a professional.  But when a new chess piece enters this tangled game, all bets are off.  After hiring a cleaning lady to keep his exotic home spic and span, he realizes that he may just be in love.  Her name is Lisa, and she seems sweet, beautiful, and slightly vacant.  All well and good, but as Charles leaves him home in her care and goes to complete his last assignment, trouble arrives.  Lisa has a boyfriend.  His name is Denny, he's a complete idiot, and he plans to make a small fortune in one day at the beautiful house of his girlfriend's employer.  Lisa and Denny stage a con job, "renting" the house to French couples in exchange for up front cash.  Of course this plan goes completely wrong, Lisa gets in way over her head, Charles struggles with his last day of work, and the plot comes whirling to a deadly end.

It all started so well.  An assassin with his gun to the head of a hooded man.  A comically thick French accent.  The beautiful coastal scenery.  Music that made you feel as if you were right in the heart of a sleepy European town.  A beautiful woman in a bikini and a sarong.  Titles to tell who was who and what their part would be in this tale.  All in all a great set up for what felt like a film that was primed to be pretty cool.  And the characters were immediately interesting; Charles the Hitman, Lisa the Cleaner, Denny the Boyfriend, Clancy the Competition.  For about the first twenty minutes things were all pointing in the right direction; I was invested and amused, the story had my interest, the characters were funny, and it looked like Dead in France was alive and well.  But then the film kept going, and the next hour proved to be a big letdown after a nice setup.

And it's hard to say what exactly went wrong.  It's not like the acting was terrible.  It was fine, if not exactly film noir.  But then again, I'm a sucker for British accents and will forgive a lot.  The characters were funny, if not amazing.  I didn't mind that they were basically stereotypes, because they each had a role to play; they weren't supposed to be incredibly deep.  And the location was beautiful, the scenes were well shot, and the film moved fairly quickly.  So there was nothing tangible to point to and say, "Yes, that's what's wrong, fix that!".  Perhaps it was only that the story couldn't hold up an entire movie.  After a while I just got bored.  I would love to see a short version of the film, one that cuts out all the unnecessary dialogue and later action and just focuses on the parts that I was enjoying so much at the beginning before everything got off track.

The action sequences didn't help much.  I'm not a fan of them anyway, and then they were poorly and cheaply done.  And for that matter they were pretty pointless.  I mean, I know Charles is a hitman and there's going to be some blood, no big deal.  But the film was about the characters, not the action.  So when he started having flashbacks of his wild assassin days when he would shoot every human in sight, the film lost it's cool Snatch feel and started seeming amateur.  Dead in France has been called Tarantino meets Ritchie, and I see that, but it's more like what would have happened if they had met each other in college and made a movie on the fly.  At least you can tell that the cast had a great time making this movie, and there are definitely positives, especially the beginning.  But taken as a whole, I lost my interest in the film pretty early on, and by the end I had checked out. 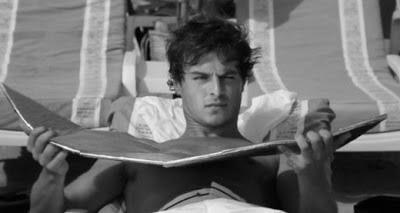 Video - With an aspect ratio of 2.35:1, the picture quality is everything you could want.  And there are beautiful landscapes and a few action scenes that are great for showing it off.  The film was shot in black & white and in 2D, so it retains a vintage feel while delivering a high quality.

Audio - There are no language or audio options on the DVD.  The sound is done in Dolby Digital 5.1 Surround, and the quality during the film is generally nice.  There was one exception however, as the background noise nearly drowned out every scene that involved Clancy.  It seems unlikely that this was intentional, but it's odd that the mixing was only bad in those few scenes.

Extras - There are a good many extras on the DVD.  Three deleted scenes are available, although they should really be called extended scenes; David Cross, Ray Chase, and The Olive.  There is a twelve minute gag reel and a photo gallery.  And there are five trailers; Dead in France Green Band, Dead in France Red Band, K-11, Laurence Anyways, and From the Head.

Rent It.  What started out as a cool movie went downhill quickly.  It had a great setup, but failed to deliver anything great.  It began as a good film noir spoof, but soon became just another cheap action movie.  The video quality was high, the audio was just OK, and the DVD had some good extras.  I wonder if this is a movie that might get better every time you watch it, as you start to forgive its flaws and just focus on the funniest parts.  So maybe you give it a shot and then a year later watch it again.  Just don't expect greatness the first time through.