I think the above picture says it all.  This film is about mold, and yes, sometimes it and bodily fluids will come shooting out of pipes and orifices.  The great thing about a movie like this is that it makes no excuses and doesn't try to impress anyone.  It is what it is, and that's a horribly disgusting and often ridiculous b-movie romp.  One thing you've got to love about b-movies is that nothing is off limits, no extreme too extreme, and that's of course what makes some of them great.  Now, not all of them are great and some are downright unwatchable.  You've got to be able to laugh at the film while cringing at the grotesque, or at least pick up on something entertaining that makes watching bad acting worthwhile.  Some movies can do that: Re-Animator, Bath Salt Zombies.  And some can't: Surf Nazis Must Die, Oasis of the Zombies.  But regardless, you're in for an interesting evening when you turn on a movie of this type.  So just sit back and soak in the mold. 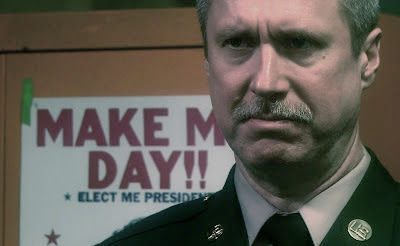 The story takes place in the 80s, when the American "war on drugs" was in full swing.  Add that to heightened tensions with various banana republics and you've got the recipe for a high level of military involvement.  At a scientific research center, the workers there are about to find out how involvement can quickly become a takeover.  Doctors Bolton, Hardy, and Young have been hard at work developing a new strain of mold, under the direction of Dr. Kane.  Their work has created something potentially deadly; a fast-acting species that can quickly take over and destroy any crop into which it is introduced, be it coca plants or the agriculture of an entire country.  This is good news for both the Congressman and the Colonel, who have both been asked to the facility to check on the progress of the mold.  Time for champagne and crackers, as both scientists and officials celebrate the impending victory of American interests.

Well, things are about to take a turn for the worse.  In a manner that no one can fathom, the mold has escaped containment.  It is out, it is dangerous, and it could be anywhere.  The first reaction of the scientific staff is lock down, as procedure demands that no trace of the strain leave the laboratory.  So for the time being, the outside world is safe, but the same can not be said for those remaining inside.  The mold can attach itself to any moisture, and its growth is rapid.  The group must stay in one room in order to remain clean, but as infection becomes more and more likely the situation becomes desperate.  The Congressman becomes sick, one of the military staff reverts back to his basic instincts, and the scientists try their best just to survive.  As the Colonel steps up into a leadership role, there remains a shred of hope, as an antidote might be effective and available.  But in order to get to it, the group must separate, face their fears, survive each other, and defeat the mold! 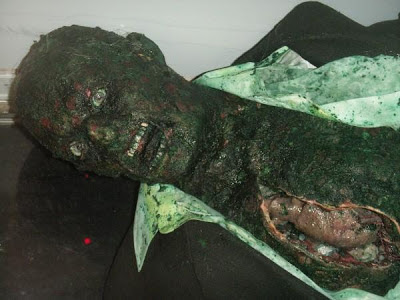 First, let's focus on the b-movie aspect.  There is a very small window between bad and awesomely bad, and Mold! barely slipped in.  It was pretty awful, as you could probably guess.  I mean, moldy slime was continually spewing out of people, infecting people, causing people to explode.  Basically, any gross thing that you could put in a movie was put in, but in a moldy fashion.  And the scientists would often "scan" their surroundings, revealing mold spores floating through the air, but somehow not entering their mouths.  Really, there wasn't much that could be called believable.  And the shaky details weren't the only things that were hard to buy into.  The acting was, for the most part, pitiful, the plot was full of holes, and the effects were what you would expect from a movie that probably cost about a thousand bucks to make.  And there wasn't any nudity or much action to give us even a small thrill; just a lot of mold.

The movie's saving grace was its humor.  Not for an instant did it try to be a poignant story, a thought-provoking film, or even remotely well made.  There was never a feeling that anyone involved in this project was trying to impress me.  It just seemed like someone had a fun idea, ran with it, and somehow created a really odd film about mold who's sole purpose was to entertain.  And they did that, in many ways.  Through gruesome images and swollen corpses, sure, but through humor as well.  It was very often funny and almost always tongue in cheek, with a goofy quality that was enjoyable to watch and easy to poke fun at.  Homely scientists, cold-hearted suits, rapidly progressing mold spores; every piece seemed designed to be a little silly.  It's always nice when filmmakers don't take themselves too seriously, and these certainly didn't.

There was one actor who embodied the entertainment-minded mentality, allowing such an awful movie to become awfully funny, and that was Edward X. Young as the Colonel.  He definitely stole the show, somehow coming off as the lead actor when he didn't start that way at all.  His humor and his character set the tone for what otherwise would have been a throw-away plot, badly acted.  He and his damned cigar, blowing smoke in the faces of the other actors, audiences, and the mold that can't quite kill him.  I'm not sure what the movie would have become without Mr. E.X.Y., but I doubt that it would have slipped into that narrow space between crap and something watchable.  And that's what Mold! ended up being; an entertaining film that was a step up from bad and was just horrible enough to be worth seeing. 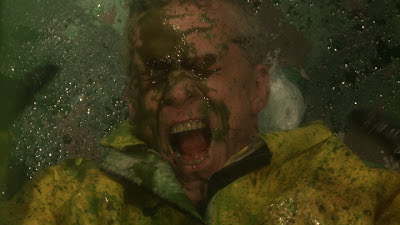 Video - With an aspect ration of 16:9 widescreen, the film was shot using a Sony EX1, which is a high definition camcorder often used by independent filmmakers.  You're not going to get much out of the video quality of this one, so don't get your hopes up.

Audio - There are zero sound options on the DVD.  No language selections, no subtitles for the hearing impaired, no audio options of any kind.  You won't get high quality sound here.

Extras - There are a few extras on the disc.  You can play the movie with the director's commentary or check out some behind the scenes footage.  There are also seven trailers: Mold!, Disco Exorcist, Dropping Dead, Exhumed, Tight, The Story of Rock N Roll Comics, and Night of the Living Dead: Reanimated. 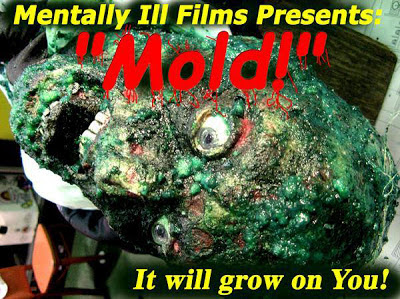 Rent It.  Mold! was just good enough to be an entertaining b-movie, but just barely.  Its humor saved it and masked its flaws, but without that and Edward X. Young it would have been pretty bad.  The video was poor, the audio was worse, and the extras were just OK.  If you love this type of movie than you could do much worse, but just don't expect magic.