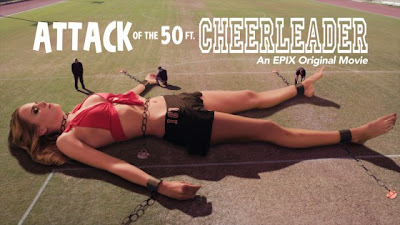 
When I first saw Attack of the 50 Foot Woman (1958), it was on one of those late night movie marathon programs, like USA Up All Night.  It must have been the early 90s, so I would have been around 10.  For some reason I remember it as being risque, maybe because it was on so late and it was about a giant woman running around in a bikini.  Looking back at it, I highly doubt it was.  I never did see the remake, Attack of the 50 Ft. Woman (1993) starring Daryl Hannah, which ironically would have been in theatres around the time I saw the original, but I always wanted to.  So when I saw Attack of the 50ft Cheerleader on Netflix, I figured I had to give it a shot.  Going into it, I knew it would have nothing to do with the other two, other than by having a giant female in it, but I didn't care.  I knew I was gonna watch a throw-away movie, and did I ever.

The plot is as bad as you might imagine it will be by the title.  Cassie, a nerdy scientist, and her partner Kyle are hard at work in a college laboratory creating a rejuvenating product for women who want to look younger and more beautiful.  When Cassie fails to make the cheerleading team (a necessity if she wants her legacy mother's approval and monetary support), she decides to become a human guinea pig for the new product, hoping that it will make her something more than the homely bore she's always been.  Well, she gets her wish, but she never expected the side effects.  Cassie grows into a gorgeous and athletic woman, who happens to gradually reach 50 feet tall.  She and Kyle must race to find the antidote before the college, the military, and the rest of the cheerleading squad find out that the new "big thing" on campus is literally gigantic.

Oh my.  Part of me is glad that I saw this terrible film, and part of me is just sad.  I mean, I didn't expect greatness, but someone could have put in some effort to make it more than complete crap.  The plot is, of course, ridiculous and sometimes funny, though usually just dumb.  I found it hard to actually watch with both of my eyes for fear that my brain might lose something important.  The acting was awful.  Jena Sims as Cassie was especially bad, and she wasn't even that hot, which as far as I know was the only requirement for the role.  Her nemesis, Brittany, was actually pretty hilarious, as was Treat Williams in a nice little cameo, so it wasn't a complete disaster.  I mean, it was a disaster, but I laughed a couple times, and the cast was made up of the typical co-eds-in-underwear that you might expect from a Van Wilder type comedy.  So it was at least partially entertaining if you like bad movies, but it would be a waste of most peoples' time, and it was most likely a waste of a few of my brain cells.