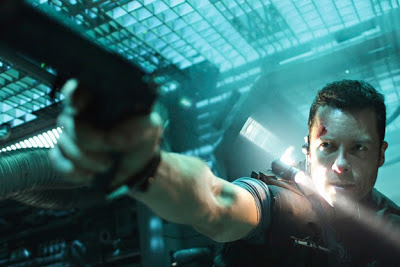 
There is a reason why I don't do action movies, and when I watch a movie like Lockout I'm vividly reminded why.  I mean, I chose to watch it to waste some time while exercising, and it served its purpose I guess.  And maybe that's why people watch action movies; to waste time, to "veg out", to be entertained for ninety minutes.  But I have a really hard time getting into them even when I think I can take off my critic hat and just let a movie be fun and bad.  Action movies are full of horrible dialogue, bad acting, pointless story lines, and unbelievable plots.  Why do we spend so much time and money on a genre that produces awful films 90% of the time?  Perhaps people just don't care, or perhaps they are searching for that hidden gem, like I do with b-movies.  But regardless, Lockout was not that diamond in the rough, not even close.

Set in the near future, the story centers around an outer-space prison complex.  All prisoners there are in stasis, and remain asleep for the duration of their term.  There are 400,000 inmates, and yet no abuse, no corruption, or so it's advertised.  When the daughter of the POTUS arrives at the prison on a humanitarian mission, all hell breaks loose.  One prisoner escapes and subsequently releases all of the the other prisoners.  When they take the First Daughter hostage, a daring strategy is enacted to get her back.  Her potential savior is Snow, a man accused of murdering a CIA opperative.  His only chance at freedom lies in finding and rescuing one girl in a space station filled with thousands of insane inmates, a mission that seems so futile it might just be possible.

Well, so much for giving another action movie a chance.  What a horrendous film.  From the very start it was bad scene after bad scene, dumb line after dumb line.  There was no cliche left unused, from the wise-cracking hero to the helpless damsel, and of course they're inevitable attraction to each other.  Guy Pierce is a good actor, but he didn't show it here.  And Maggie Grace was just plain awful.  The only thing she had going for her was that she looked good, and then they chopped off her hair, dyed it black, and bruised her face.  So, there goes that.  The whole movie was like something I might have made up when I was bored as a kid, not an actual Hollywood movie.  The only saving grace was that it would have made a really cool first person shooter.  It looked and felt like a video game, and if you look at it in that light then maybe you can forgive its flaws.  But, hey, they should have made it for XBox then, not DVD, and saved me having to watch one of the worst sci-fi/action movies I've ever seen.