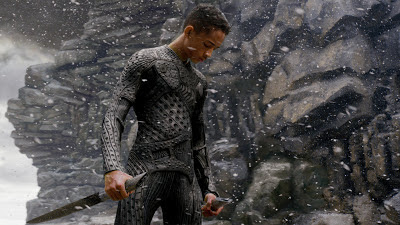 
It all started with Jaden Smith narrating with a Southern accent.  I'm not kidding.  I wish I was, because it was perhaps the worst fake accent I've ever heard, with Will Smith's being a close second.  I have no idea why they decided to try something so stupid; perhaps it had something to do with the Ranger Corps that saved humanity in the story, but it doesn't matter.  Whatever the reason, it was a bad idea, as was almost ever single idea in the entire movie.  When I first saw the trailer I was excited.  I wanted Shyamalan to get back to directing good movies, I wanted Will Smith to be cool like he used to be, and I wanted an awesome sci-fi movie about evolution/mutation/survival.  Well, apparently critics and audiences were right when they slammed After Earth, because it didn't deliver anything I wanted.  And I can't even say that I was left wanting more; I was left wanting my money back.

The story begins a thousand years from now.  Earth as we know it has changed.  Humans destroyed it with pollution and war, creating an inhospitable environment for mankind.  So a mass exodus began, and a new planet called Nova Prime was settled and became man's new home.  However, they weren't alone.  The native alien race there became bent on human destruction, releasing monsters called Ursas that can sense human fear and who's only desire is to kill.  General Cypher Raige leads the resistance, as his son Kitai tries to be just like him.  On a routine space flight, their ship is damaged and they must crash land on a quarantined planet; Earth.  What they find there is a planet that has evolved to be deadly to humans, a dangerous jungle that is almost impossible to survive.  With his father injured, Kitai must travel alone across the wild landscape in search of a way home; battling animals, nature, and his own fears in a desperate attempt to get back. 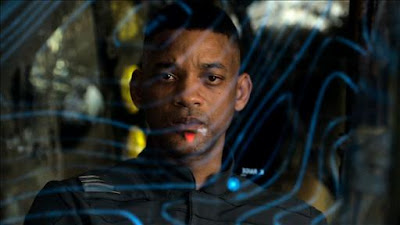 At first I wondered why the story was so juvenile and awful, and then I saw that Will Smith wrote it himself.  It was an idiotic premise loosely tied to reality and copied from a thousand other plots.  I mean, the main character is named Cypher Raige.  Did he steal that from a Warcraft chat room?  And all the other details of the story were just as bad: fighting aliens with a lightsaber-like weapon, spaceships that looked like stingrays, computers that instinctively know everything.  I know it's a PG-13 sci-fi movie, but shouldn't the plot still be somewhat believable?  I never once thought that any aspect of the movie could actually happen.  It was silly, sloppy, and had no redeeming qualities that could make you overlook it's flaws.  From beginning to end I was constantly frowning and looking around, wondering if every one else just heard what I did and also thought it was crap.

And wow, things got worse when Jaden Smith came to Earth and started carrying the movie.  He was as bad an actor as you are likely to find.  The accent didn't help, but I doubt it hurt much either, as every line was over-delivered, forced, and amateur.  I never believed for a second that he was an actual person running from danger; he always looked to be in a studio waiting for his shot to end.  And acting aside, I had high hopes for the plot once the characters starting fighting for survival on Earth.  It was hyped as a planet evolved to kill humans, but it wasn't.  It was just a place, and the most deadly thing around was the alien they had accidentally released there.  The low point was when Kitai befriended a giant bird; at that point I pretty much gave up.  The only nice thing about the movie were the visual effects and stunning landscape.  Too bad it was the background for a horrible story told by an inept actor.  Don't see After Earth unless you are interested in how not to make a movie. 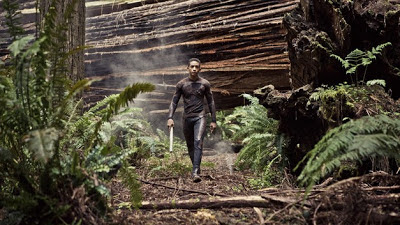