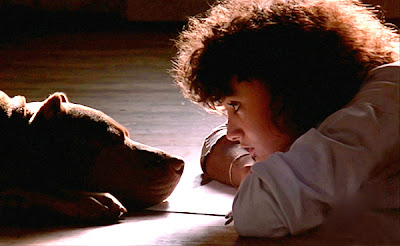 
I love 80s movies.  I don't even know what it is; maybe the gritty nature of the films, the terrible yet wonderful music, the big loud clothes & hair, the coked-out imaginations of the filmmakers.  But whatever it is, 80s movies are great.  Top Gun, Legend, All the Right Moves; and those are just the ones with Tom Cruise!  But I had never seen Flashdance, an 80s dance classic that is full of iconic scenes.  When it won You Vote, I Review I was excited to finally see it and experience one more incredibly over-the-top funky favorite.

Alex is a female welder and night club dancer.  That's right.  She lives in Pittsburgh, welds by day and dance in a non-nude bar for extra cash.  But it's not just for the money.  She loves to dance, whenever and wherever she can.  It is her passion, and yet she's never had any formal training.  She dreams of someday becoming a ballerina, but her fears hold her back.  When she meets and falls for her rich boss Nick, he opens up her heart and allows her to finally believe in herself, something she has never been able to do until now.

It was pretty fabulous if you like non-stop 80s music, 80s hair, and 80s fashion.  It was the epitome of the time and the genre, so it's worth something right there.  The music was great, with the songs we all know; What a Feeling and Maniac.  The dances were frequent and a little crazy, but hey so were the 80s.  The story was a little far-fetched, and that's putting it nicely.  And the acting didn't really help, as I never believed Alex loved Nick, or vice versa.  It was a movie to be watched because of what it is, not because of how good it is.  But still, worth a shot.