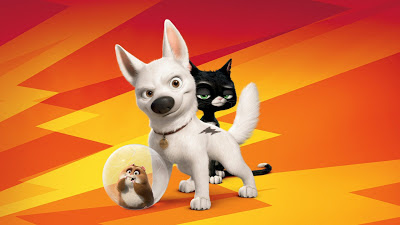 
I first saw Bolt in the theatres when it first came out with a family who's little girl had already memorized most of the lines.  I don't know how many times she had seen it, or if she just really loved it the once, but she was pretty into it.  Her intensity was infectious, and I found myself laughing more than I had expected to.  Watching it again with my own daughter, I wondered just how funny I would find it the second time around.  It turns out that it wasn't quite as hilarious as it seemed originally, but that it also wasn't as bad as I feared it might be.

Bolt is a super-canine.  At least, he plays one on TV.  He is part of an action show about a scientist father, his tenacious daughter, and her powerful pup; a little like Inspector Gadget.  But Bolt doesn't know that he's just an actor, it all seems real to him.  So when his beloved Penny is "captured", his instincts kick in and he's off to the rescue.  Unfortunately, his super powers don't seem to work off camera, and Bolt finds himself lost on the other side of the United States, desperate to get back to his Person.  Luckily for Bolt, he finds help along the way in the form of Mittens the cat & Rhino the hamster, who comes with a handy ball.  The trio travel across the country, become friends, and learn about themselves on their quest to save the day.

For a kid's movie about a super-dog, it isn't awful.  The characters are actually really likeable; Bolt with his misguided confidence, Mittens the street-smart alley cat, and of course Rhino, who really steals the show with his comedy and complete belief in the reality of the TV show.  However, if I take Rhino out of the equation, nothing else was really that funny.  He kind of made the movie; without him it's just bad voice overs.  And talk about bad: Miley Cyrus & John Travolta.  I'm not sure how they could have possibly put less emotion into their lines.  They almost ruined it, but at least you couldn't see them.  Their bad acting faded into the background and Rhino's ridiculous humor and quotable phrases came to the foreground.  Good thing, because it made Bolt a fun & entertaining movie, one that I can't recommend strongly but didn't actually dislike.