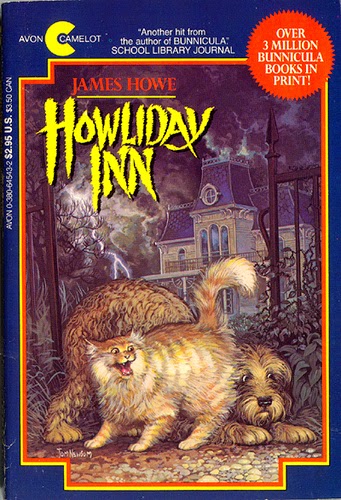 
When I was in grade school we read Howe's The Celery Stalks at Midnight, which is the third book in his Bunnicula series.  Howliday Inn is the second, with the original Bunnicula the first.  I really don't remember much from so long ago, but I've always wanted to read these books; it's hard for me to let a series go, to not read & buy every book just so that the collection is complete.  It's a sickness, I know, one that's encouraged by my local Half Price Books store.  Anyway, I picked up this book and read it to my kids, fulfilling my dream.  Not much of a dream, and as it turns out, not much of a book either.

Chester the cat and Harold the dog are recurring characters, members of the Monroe family, that are too smart for their own good.  Too dumb for their own good too, finding themselves in the middle of trouble and never knowing quite what's going on.  In this story, Chester & Harold are sent to a boarding kennel for a few days while the Monroe's go on vacation.  There they meet a variety of strange animals with odd habits.  And when pets begin to go missing, each character becomes a suspect, as the daring duo try their best to unravel the mystery before it's too late.

Howliday Inn is a quick and enjoyable read with not much else to offer.  If you're a fan of the series and the characters you'll like it on that level, but I've got to say it's not the best written book.  The humor is sometimes silly, sometimes adult, with plot lines that seem disjointed and out of place.  I'm not sure what age group this book is targeted to, because a lot of it was over my kids' heads and I only seldom found it funny.  Maybe it's designed for 10-year-olds, that would be about right, and they'd probably enjoy it more than I did.  But it was alright, with a good many opportunities to read it aloud in different voices and really take the story over the top.  Don't go out of your way to find it, but there are worse books that could fall into your lap.