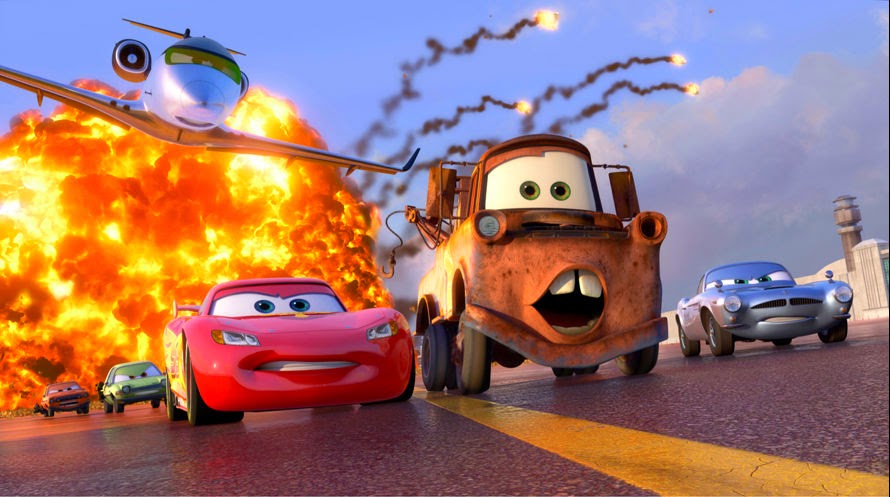 I liked Cars a little more than I expected to.  I mean, I like Pixar movies and I like Owen Wilson, so I assumed I'd like it a little.  But it ended up having a bit of a magical quality that I didn't see coming; the town rallying around Lighting, his friendship with Mater, some good music.  And the fact that my son loved the movie before even seeing it helped, I'm sure.  I've read the books, looked up information on the characters, bought a Cars pillow; I guess I was ready to enjoy the film and I did.  Too bad Cars 2 had none of the wonderful pieces that made the original film great.  Hard pressed, I guess I'd say I still liked it, but it was a close call.

Lighting McQueen has returned to Radiator Springs a multi-champion, bringing life to the once-dead town.  Now he sets his sights on international fame after being challenged by Formula One driver Francesco Bernoulli.  The World Grand Prix will be raced in three different countries, the winner heralded as the best driver in all the world.  Lighting, of course, wants to prove that he can do more than drive in circles, and he takes the whole hang with him on the road.  Trouble is, Mater has never been away from home before and is in way over his head with these big shots, especially when he finds himself mixed up in some sort of spy plot that he doesn't understand.  A British agent named Finn McMissile is attempting to foil a plan bent on ruining the Grand Prix, some vile conspiracy involving offshore oil and lemon cars.  Mater accidentally becomes involved, dragging his friend Lighting into the mess.  Can the two cars survive their trip around the world?

First off, this story is too complicated.  It involves super villians, Big Oil, Bond-like espionage, and a hundred different clues leading to the ultimate conclusion.  I had a hard enough time staying interested and a ton of it went right over my kids' heads.  The genius of Pixar is that their movies entertain children while also appealing to adults.  This one landed right in the middle and didn't do either very well.  And it featured Mater way too much.  I don't think he's funny, that's just my taste.  I don't like Larry the Cable Guy, I don't like country humor, and this film was stuffed full of idiocy disguised as comedy.  Not enough Lighting, too much Mater, a messy story, explosions and gunfights in almost every scene, an awful soundtrack; come to think of it, I'm not sure why I'm giving this movie three stars.  I guess because the animation was excellent and I loved Michael Caine as Finn McMissile.  Had he not been there and had Mater been even more of a star, I think I would have enjoyed it much less.  Stick with Cars, avoid Cars 2.