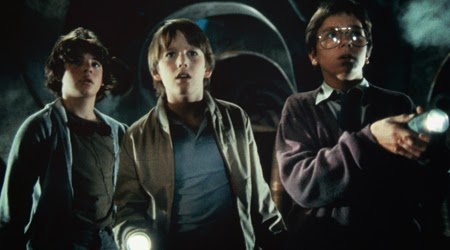 
Talk about a throwback; I should have posted this on a Thursday.  I would have been a two-year-old when this movie came out, but I remember watching it at some point as a kid and really enjoying it. At the time it was a really cool sci-fi flick; listen for mention of a 120 byte computer.  It had cool graphics, a detailed story, and a semi-plausible scientific plot.  With kids as the heroes and inventors, I was hooked.  And look who the kids were.  Jason Presson didn't really go on to do anything else besides Gremlins 2, but Ethan Hawke is still a star today.  River Phoenix would die eight years after this film, cutting short the career of an excellent up & coming young actor.  I'll always remember him for his role in Stand By Me, one of my favorites.  But here's a chance to see Hawke & Phoenix side by side in a really cool film that is still enjoyable almost thirty years later.

Ben has been having some very strange dreams lately.  Maybe that's because he falls asleep to old low-budget sci-fi creature features, or maybe it's because someone is trying to tell him something.  Either way, the dreams lead to the discovery of a powerful force field, one that can go anywhere, even into space.  When Ben and his best friend Wolfgang harness the power of the sphere, the possibilities are endless.  With the help of the handy motor-minded Darren, the boys create a craft that should take them wherever they want to go, be it peeping into bedroom windows or cruising among the stars.  And when they discover just who has been sending them this amazing information, their lives will never be the same.

Explorers is everything you could ask for from a juvenile space movie.  It's got cool kids, neat tricks, and a story that makes you feel something.  When I was younger I enjoyed it on a pretty simple level, and I guess not much has changed since then.  I still enjoyed it, but there really weren't more levels than I had seen the first time.  It's fun to see Hawke at this age, showing star power even as a youngster.  And with Phoenix as his side-kick, the film was bound to be a success.  The direction isn't amazing and the end drags a little, but as long as you're not too picky this is an entertaining tween adventure, one that I look forward to sharing with my kids someday.