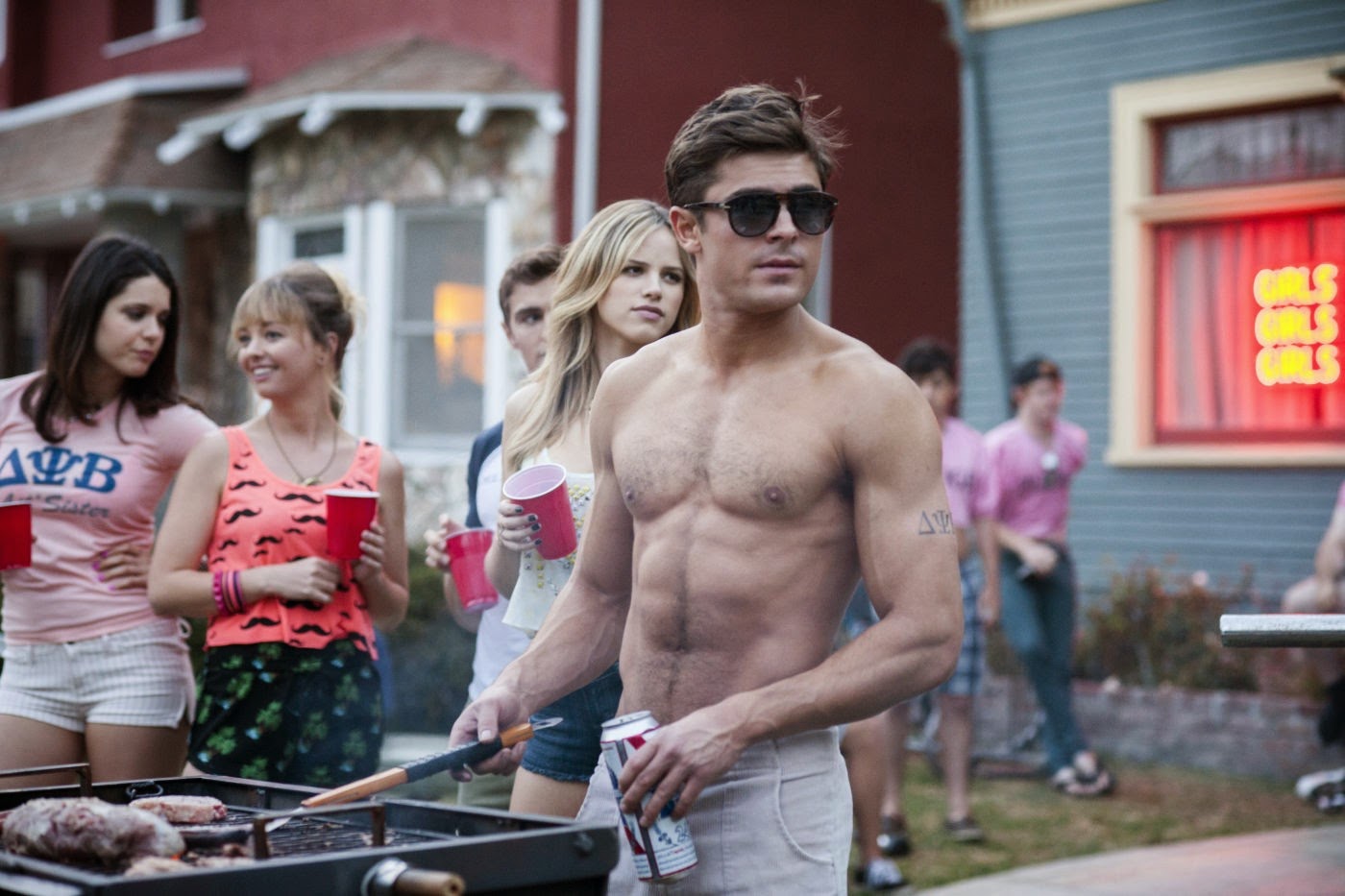 
Zac Efron has come a long way from his High School Musical days.  Now he's running around shirtless, drinking beer, and hanging out with Seth Rogen, on screen anyway.  He's not that annoying teenager anymore, he's graduated and become an annoying frat boy.  Well OK, maybe he hasn't come incredibly far since becoming a star, but at least he's trying.  His roles have been increasingly adult, The Lucky One and That Awkward Moment.  I'm not saying his movie choices are the best or that he's about ready to win an Oscar, but he's got genuine talent and I have hope that he will become something solid within the next few years.  In Neighbors he joins with Seth Rogen, a bona fide funny man, and the result is pretty much exactly what you should expect; a movie that's horribly wrong but incredibly amusing, a comedy that's both juvenile and adult, a film that you laugh along with in spite of your better judgement.

Mac & Kelly are new parents.  They've traded in their old partying ways for a baby, a mortgage, and a life that's a little less exciting.  Having sex in a random room is about as crazy as they get these days, but they love their daughter and they love each other, so it's all good.  That is, until a fraternity moves in next door.  At first the young couple tries to be cool, wanting Teddy and the other boys to think they're hip.  But they soon realize that living next to a frat house isn't going to be much fun, not with an infant trying to sleep, and that they may have left their all-nighter days behind them.  After the cops are called to break up a wild party, a war starts between the neighbors, a game of chicken to see who will be forced to move out first.  The grown ups battle the college guys in a take-no-prisoner fight for the street, a competition that can't possibly end well. 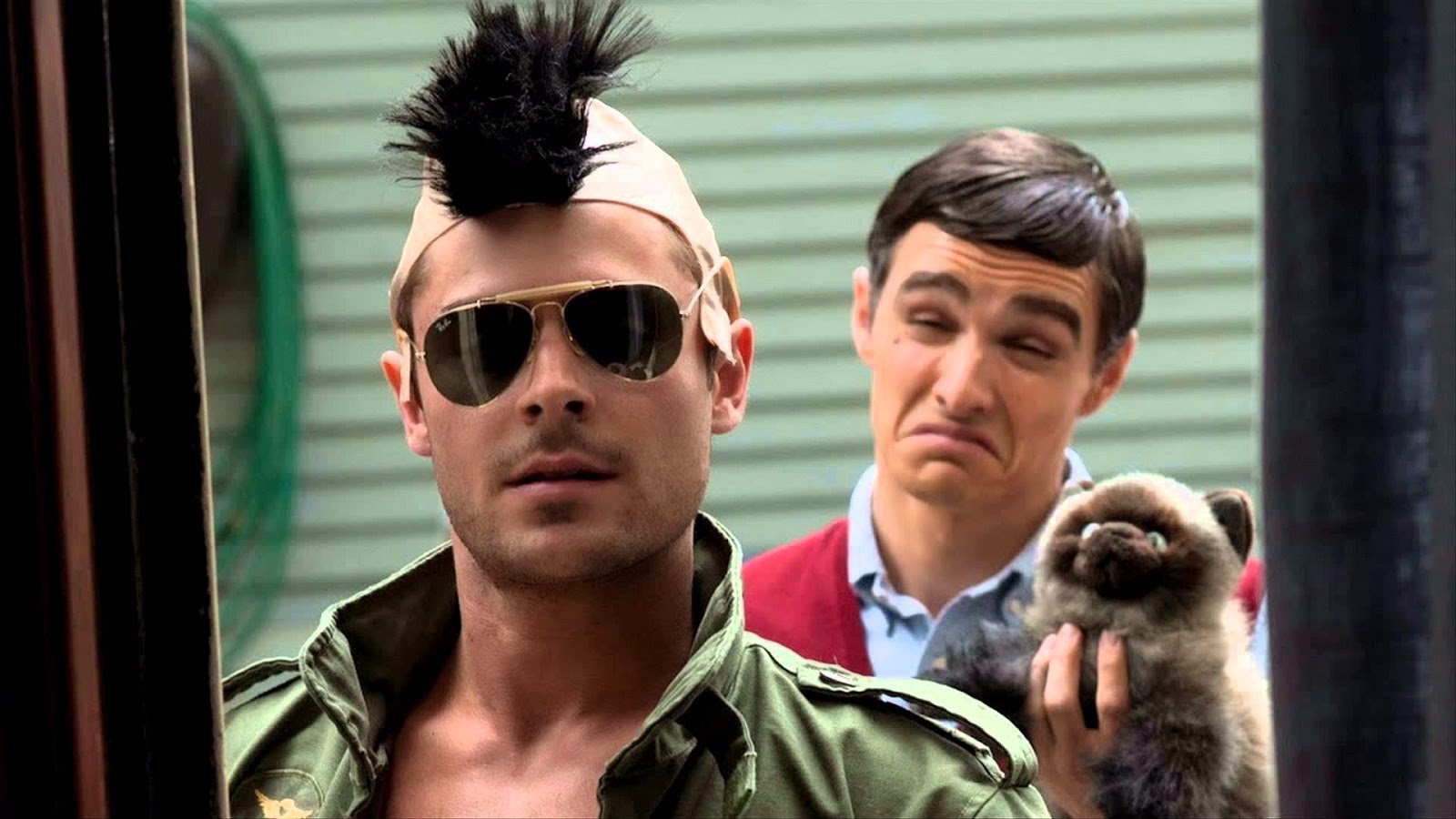 I called this movie "wrong" and I think that's the correct word.  Think Animal House but with as many penis jokes as Superbad.  Think Old School but with lactating breasts.  Constant inappropriate comedy, crude physical humor, sex, boobs, dicks, pot, shots; it's all here.  You had better come prepared for frat boy antics, babies playing with condoms, and 160 curse words per minute.  Not scared?  Then you're in for a good time.  Neighbors is a hilarious & wild ride, a film designed to make you let loose and enjoy yourself for ninety minutes, even if you know you shouldn't.  It's wrong, crass, horrible, disgusting, but always for laughs and always with a "lighten up" air.  It does have a Judd Apatow feel, although maybe that's just Seth Rogen, so use that to gauge whether or not you should sit down to watch this one.  Do you enjoy dildo fights and 'shroom binges?  Then step right up, because this is the film for you.

Putting the ridiculous nature of the film aside, it was actually fairly well made.  Seth Rogen is funny, as always, naturally delivering lines that only he can pull off.  His wife, played by Rose Byrne, was also pretty solid, a Australian MILF who can dirty talk with the best of them.  And Zac Efron held his own too, sliding right into the big-man-on-campus role and filling those shoes well.  He and Rogen worked well opposite each other, bringing the funny but also a little deeper meaning to the story, a moral about growing up, making choices, and appreciating what you have.  I was surprised by the amount of parent-related jokes there were, from breastfeeding to packing the diaper bag, comedy that I doubt resonated well with the college crowd but I found very amusing.  Overall, Neighbors was a funny movie, nothing more & nothing less.  The worst part of it was Dave Franco, who literally CAN'T ACT, but the rest was entertaining and over-the-top in a good way.  You'd better enjoy this style of raunchy comedy and you should probably just give up on keeping any sort of decorum, but if that sounds alright then go ahead and enjoy;  I won't judge you. 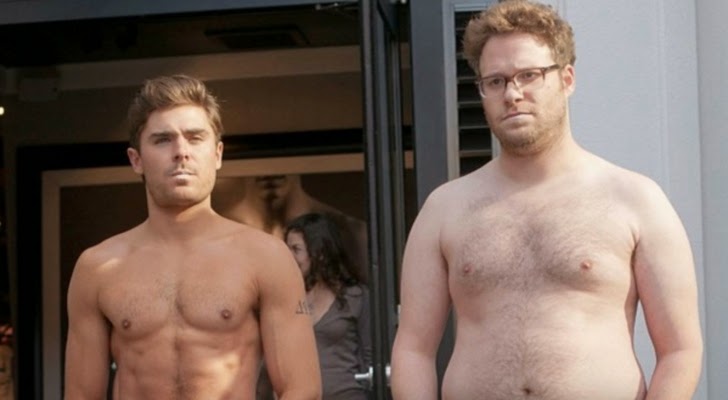