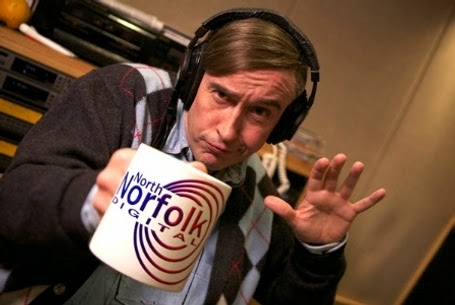 
I've seen Steve Coogan in a few movies but I guess I didn't realize what his claim to fame was.  I knew he was a British actor and that his American roles are only the most recent of his projects, but that's how I knew him, from his Hollywood characters.  What I didn't know was what he became famous for; his portrayal of Alan Partridge.  Coogan created the persona of Partridge in the early 90s, playing him on BBC radio and TV.  He would go on to act in several television series as Alan Partridge, the radio DJ with an extremely unique outlook on life.  Now Alan has been brought to life in a feature film and the results are hilarious.

Alan Partridge is a semi-celebrity, hosting Mid Morning Matters on a local British radio station.  His style & humor aren't the most PC, but he definitely has a lively personality.  When a new company takes over the station, Alan and the other DJs fear for their jobs, but only the very boring Pat is shown the door.  But not for long, because he soon returns with a gun and an axe to grind.  Pat takes the entire studio hostage, all except for Alan.  But Alan is about to make a reappearance too, this time as a hostage negotiator.  He's Pat's only "friend" and so volunteers to go in and be the go-between in the hostage release negotiations.  Alan sees this as a great chance to enhance his career, but first he'll have to survive Pat's anger, the paparazzi, and his own uncontrollable ego.

This was the funniest movie I've seen in a while.  From the very beginning each line was crafted to be side-splitting and it really never let up.  Coogan's character was excellent, and you could tell he'd been doing it for years.  It felt thought-through, not like he just came up with an idea he thought might be funny.  Partridge is a proven character, one that Coogan has perfected through the years.  You'd better love British humor though, because the jokes are 100% English; witty, crass, unrelenting, unapologetic.  The only trouble I had was the shear volume of humor and the speed with which the jokes were delivered.  Often I was laughing and couldn't hear what was just said, or I was still trying to decipher thick accents while giggling to myself.  I'd like to go back right away and watch it again; I have a feeling that this is one of those movies that gets better each time.  Alan Partridge is an awesome comedy, a parade of humorous characters spouting off hilariously irreverent lines.  A must-see for those who love British humor, Steve Coogan, or making fun of the Irish.