Movie Review - Trouble with the Curve 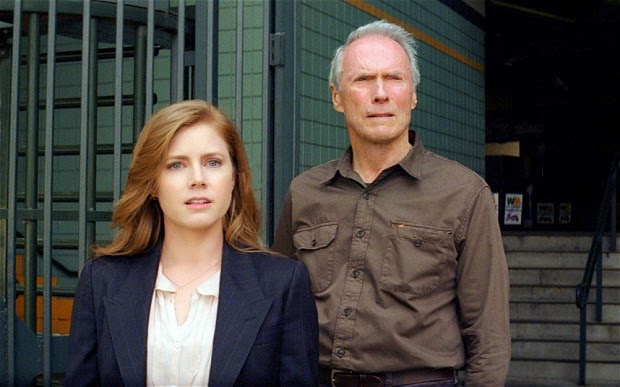 
Americans are enamored with baseball movies.  I guess it's the whole "America's past time" thing, but there's definitely something intangible that draws us to baseball.  The classic feel of the game, the pleasant weather, the relaxed atmosphere; we like to go to the ballpark and have a nice time.  And the story lines inside the action are what really hook us.  The dreams of the players, the one-on-one matchups, rooting for our favorite team; we're just drawn to the sport.  So it's easy to make a baseball movie, to pull those heartstrings, to bring that smell of the field to the screen.  But it's not so easy to make it good.  Succesful, sure.  Excellent, not so much.  Trouble with the Curve is a great example of a film that uses the standard elements that always work and that are guaranteed to please audiences, but that don't stand up under scrutiny.

This is the story of Gus, an old baseball scout who knows the game inside and out, but whose career is drawing to a close.  New methods of scouting have outpaced him and his eyesight isn't what it used to be, though his keen judge of talent is as good as ever.  When a top prospect catches the eye of Gus's team, the Atlanta Braves, he is sent down to watch the kid play.  Joining him on the road is his daughter, Mickey, a lawyer who hasn't been close to Gus in years, ever since he sent her away from the rough life of a baseball scout. Mickey & Gus have some problems to work through, problems made more difficult by heavy corporate pressure to draft this prospect and by the advances of fellow scout Johnny, who idolizes Gus and is smitten with Mickey.  This may be the last rodeo and a last chance for redemption, so Gus had better get the call right, both on the diamond and off.

Without the redeeming quality of being about a sport that I love, this would have been one of the worst movies I've seen in some time.  It was a series of cliche moments, scenes that we've seen a thousand times.  This was Lorenz' first and only directorial attempt, so maybe he just couldn't think of anything original, or maybe he and the writer thought the content was original because neither of them had ever seen a movie before.  Terrible, terrible dialogue, predictable "twists", nothing new or interesting at all.  And to top it off, the acting was awful.  JT was stupid, Amy Adams was the worst I've ever seen her, Eastwood was boring, and John Goodman could have been replaced by any actor in the world.  Bad direction, bad acting, bad music; the only pleasant aspect of the film was the subject matter.  Good thing I like baseball, because wow.